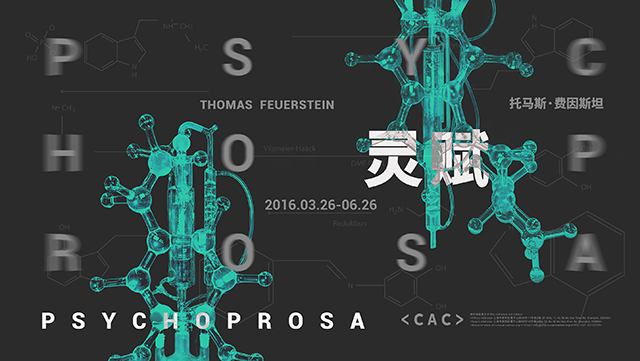 Chronus Art Center(CAC) is pleased to present Psychoprosa, the first solo exhibition in China by the Austrian artist Thomas Feuerstein. Psychoprosa is a large installation consisted of eighteen artworks that together transform CAC’s 500 square meters gallery space into a studio reminiscent of a mysterious alchemist’s workshop while gracefully arranged akin to a tidy and ordered modern laboratory.

Thomas Feuerstein comes from Innsbruck, where he studied art history and philosophy in the 1980s and 1990s. His works in the 1990s can be characterized by an examination of the media and technological conditions under which a globalized society unfolds, before he began to investigate questions on biotechnology. His artistic starting point is one of boundary-crossing, whereby he examines the interfaces between different disciplines, directions of thought, fields of research and science, and between politics and society. In this process he wanders effortlessly among scientific facts, mythical superstition and futuristic science-fiction visions. In the exhibition Psychoprosa the artist has conceived a spectacular installation on the borderline between art and scientific experiment. He connects new groups of work, as well as earlier pieces with a similar set of themes to produce a multilayered narrative pointing to the future of a society shaped by its novel biotechnological possibilities.

The show is made up of laboratory vessels, equipment and refrigerators connected through a system of flexible tubes that transports green or colorless liquids from one stop to the next. In accordance with the appliances present in the room, Feuerstein has given the individual areas telling titles: Greenhouse, Gate, Laboratory Kitchen, Cooling Chamber and Factory. Linked by pipes, the apparatuses and objects seem like active protagonists: inside glass sculptures, substances are transformed by invisible laboratory assistants, and refrigerators open and close as if inspired by demons or ghosts. A chemical process is employed to extract a synthetic substance from algae and fungi to create the molecule psilamine, which does not yet occur in nature. The remaining biomass comprises a slimy material, which develops a viscous consistency after heating, cooling and mixing: thick threads and veils form a transparent, liquid sculpture. If we were to consume the “molecular sculpture”s psilamine, solid objects would deliquesce and begin to flow in our perception. In this way the psychotropic effect of the substance - which the exhibition visitor does not experience but can only imagine - is reflected in the exhibition as a real process. Crossing and confusing the borderlines between our inner and external worlds is a central aspect of Feuerstein’s Psychoprosa. The slime that permeates the entire exhibition in a real as well as a thematic sense refers, on the one hand, to horror fiction and one of its early masters, H. P. Lovecraft (1890–1937); on the other hand it highlights - as a social metaphor - questions regarding the definition of the individual and the dissolution of social boundaries.

On the wall next to the exhibition entrance is mounted a series of 28 lithographic prints that unwinds parallel to the story For He’s a Jelly Goo Fellow, the literary source for the exhibition. While the drawings and the story place the formless material slime at the centre of an approach nourished by scientific, technological, psychic and animistic aspects to understand a world that is torn between a longing for nature and technologization, the entire installation which branches off into the 500 square meters exhibition space serves to demonstrate how psilamine and the slime are produced, and to display the products. The Greenhouse is dipped into an atmospheric green where the algae and fungi are cultivated in bioreactors along with hybrid sculptures anthropomorphized and personified by names such as Iuturna or Élaine, combining laboratory apparatus, sculpture, standard lamp, and futuristic house plant. The tubes containing circulating substances turn into the lines of a three-dimensional drawing as they snake their way through the exhibition space. From the Greenhouse onwards, they lead to a sculptural apparatus titled Gate, where the algae are filtered and the water needed for the slime production is processed. In the Laboratory Kitchen, viewers are then to encounter the two sculptural laboratory vessels Mrs D. and Mr P., as well as the newly extracted psilamine presented in two artworks. Baby Psi is made up of laboratory flasks and again visualizes the modular structure of psilamine, while Psiloprose sees crystalline psilamine grow out of the printwheel of a typewriter. Further on a glass table top that rests on a fictitious molecular sculpture, a bust made of silicone named Uncle Bib rattles vigorously; while its jelly-like consistency reminiscent of slime, Kalte Rinde sees Schopenhauer’s complete works infested with a slimy dry rot, appropriate to the philosopher’s conception of the world. The two final stops in the exhibition, the Cooling Chamber and the Factory, see the slime being manufactured and processed. The dimly lit Cooling Chamber contains innumerable refrigerators that hold the tinned slime. The spectacular Accademia dei Secreti which forms the conclusion and climax to the entire installation sees transparent slime being pumped through enormous glass vessels in vast quantities. The artist now introduces his audience to the “slime age”, during which humanity will protoplasmically merge to form a new collective.

The title of the exhibition Psychoprosa fuses two notions - “psycho” points to an inner or spiritual life with personal experience and perception while “prosa” indicates narrative or scientific literature - that subtly reveals a special narrative method, which the artist calls conceptual narration in which he exhibits correlations between nature and culture, living and dead matter, organism and object, man and machine while fusing facts and fictions into a dense structure, to dissolve dichotomies and borders, and tell new stories using familiar elements, systems and objects.

About the Aritst
Thomas Feuerstein was born in 1968 in Innsbruck, Austria. He studied art history and philosophy at the University of Innsbruck and received a doctorate degree in 1995; he works as artist and author in the fields of fine art and media art. From 1992 to 1994, along with with Klaus Strickner, was co-editor of the magazine Medien. Kunst. Passagen., published by Passagen Verlag in Vienna. In 1992, he founded the office for intermedia communication transfer and the association Medien.Kunst.Tirol. In 1992 and 1993, Feuerstein’s received research commissions from the Austrian Ministry of Science on art in electronic space and art and architecture. Since 1997, he has assignments as lecturer as well as visiting professor at the University for Applied Arts Vienna, Bern University of the Arts, the F+F School of Art and Media Design Zurich, University of Innsbruck, Applied Science University Vorarlberg and the University Mozarteum Salzburg.

Thomas Feuerstein’s works and projects are realized using various media. They are comprised of installations, environments, objects, drawings, paintings, sculptures, photographies, videos, radio plays, and net art. Some of the crucial aspects are the interplay between verbal and visual elements, the unearthing of latent connections between fact and fiction, as well as the interaction between art and science. For his purposes, Feuerstein has come up with an artistic method he calls “conceptual narration”. Since the end of the eighties, he has investigated the possibilities of algorithmic art. Beginning in the early nineties, the first net installations looked at the economic and mass medial conditions for the construction of reality. The Biophily project (1995 to 2002) puts up for discussion a new idea of man in the face of bio-technology and genetic engineering. Other projects examine the interplay between individuality and sociality, formulate the aesthetics of entropy, and develop a daimonology of cultural processes.

Philosophers often write unsparingly about art. Gilles Deleuze was erudite about film; François Laruelle found his claims hypostatized in James Turrell’s pervasive light; Alain Badiou thought art was one of the four domains (others being love, science and politics) in which truths can be attained. But they don't get their hands dirty.

Trained in philosophy and art history, Thomas Feuerstein turned out to be an artist who does not philosophize art, as Arthur Danto so characterized contemporary art, mired in a charade of signification in which whirling signifiers and the signified run the gamut of human drama. Feuerstein is a materialist in its most earnest sense. Feuerstein’s engagement with the province of evocation is one that penetrates straight into the most fundamental component of the material world: the land of molecules which constitute all life and nonlife.

Feuerstein created “Psilamine,” a primordial element, which is capable of morphogenetic potential, eliciting a Simondonian milieu of pre-individuation, a metastable order from whose provenance beings of all sorts germinate, crystallize and transmute in perpetual individuation. Feuerstein’s love of pipes and liquids, laboratory vessels and single cell organisms, mucus and crystals is indicative of a fluid transduction between life and nonlife, organic and inorganic, machines and psychic space. His ambitious assemblage Psychoprosa is no less than a transductive rite of passage set in constant motion and transmutation, bifurcating into reciprocally interobjective networks of co-evolution and symbiosis wherein multiplicities flourish and converge to serve the extraction of the hallucinating element “Psilamine” and its by-product of massive piles of slime that will gradually encroach upon human habitat and eventually melt the corporal into the isomorphic substance. It is in this evocation of a Lovecraftian vision that Feuerstein reincarnates the ouroboros myth in which the past comes back to bite the future and the end regurgitates the beginning.

By engendering matter in its most elemental form, that of a molecule, Feuerstein provokes matters of concern that hover ghostly under the sun: the dissolution of nature as the final score of the Anthroposcene. This is the mighty work of modernity that vanquishes nature as the subjugated object-world in the service of human subjects. Feuerstein’s spectacular assemblage, through its transformative evolution coupled with minute execution, experientially plunges us into an otherworldly sensation that is at once pre-modernly mysterious and post-humanly scientific, and intuitively prompts us to consider a Latourian precaution: we have never been modern! And that the distinction between the subject and the object, culture and nature, humans and things is but an artificial divide of spurious faith, which ought to be re-imagined anew and can indeed be dissolved in the wake of the slime that is the beginning and the end simultaneously and retroactively. Because of this new outlook, the future may still be hopeful.