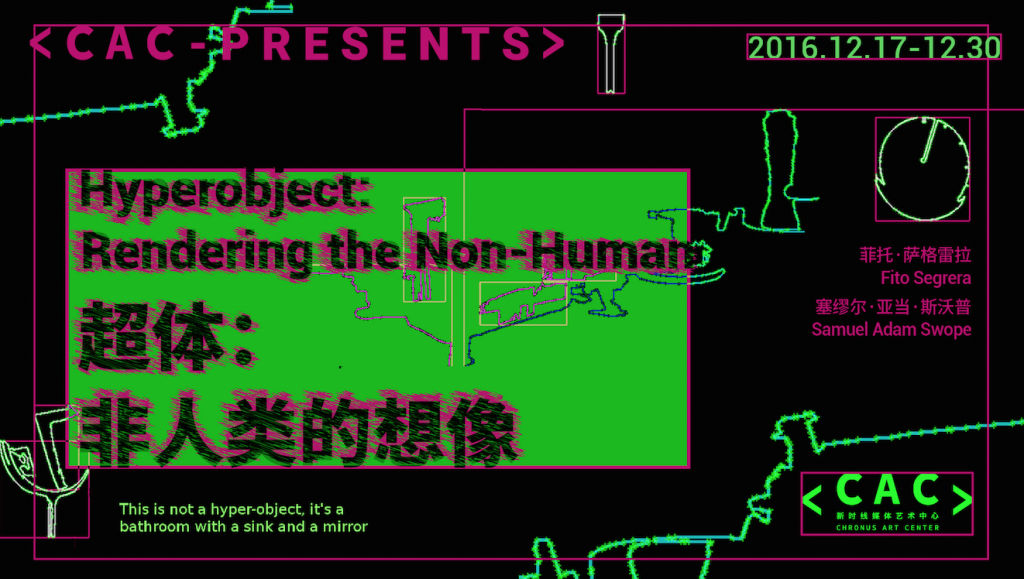 Chronus Art Center is pleased to present Hyperobject: Rendering the Non-Human, an exhibition resulting from CAC_LAB’s research and creation practice integrating artificial neural networks, cognitive computation and quadcopter technologies into the art-making process. Featuring a multiplicity of ever-changing layers of reality rendered by the machine and things through autopoiesis, Hyperobject opens up a new potential beyond conventional aesthetics, thus challenging human knowledge and perception of time, space and the mundane world. The exhibition will be on view from December 17th to December 30th, 2016.

Viewers entering the exhibition space will first encounter an array of hovering hyper-physical objects within Samuel Adam Swope’s staged house: Floating Room. Conceived as a sensorial, sculptural installation, Floating Room shapes interfaces between our things, flight, and air, and between fantasy and digital realization, transforming the domestic space from static and quiet dust-collecting rooms into sensational buzzing, windy soundscapes. From taking off, to hovering or drifting, and then landing, these floating technological-domestic hybrids touch other home interior artifacts through air currents or impact, embodying a message that mixes humor and narration into contemporary inquiries regarding emerging flight technologies, novel approaches to product delivery, and future smart homes.

While Swope’s Floating Room shifts domestic products into featherweight, hovering airborne whimsies, The Treachery of [soft] Images, a newly made piece by Fito Segrera, proposes an inquiry into new forms of conceptual art by making use of cognitive computational systems and Internet technologies. In The Treachery of [soft] Images, two framed computer-displays are hung on the wall and networked together. The piece appropriates Rene Magritte's famous statement “This is not a pipe” in his painting The Treachery of Images and utilizes it as the starting point for an experiment in art and machine learning, hence revealing a new hybridized notion of reality rendered over our natural cognition by intelligent on-line systems.

As an attempt at restoring the technical and other non-human existence on par with human being to its due place as an equally disruptive and transformative potentiality, Hyperobject: Rendering the Non-Human with its concrete and vivid examples leads up to fundamental questions on things and the evolution, which in Timothy Morton’s terms, “is radically non-teleological. In evolution there is no high or low. A life form is not more or less evolved than another life form,” and knowing is thus just one mode of accessing a thing and by no means the top access mode.

Samuel Adam Swope
Samuel Adam Swope, born 1984 in Missouri, USA, currently based in Hong Kong, is an artist most recognized for his Aerial Art and for inventing novel situations with artistic merit. Samuel feeds off his innate boyish curiosities, imagination, and mischievous behavior. He follows heuristic methodologies and seriously plays. He fancies apparatuses with aesthetics, craft, and technique, but that maintain a core concept related to science and whimsy.

His continued interest in contemporary uses of apparatuses, performance, technology and DIY culture has enabled him to exhibit and lecture internationally in art spaces and academic and cultural institutions, for example ISEA 2016 Hong Kong, Este: Coordenadas Itinerantes Colombia, Nightingale Chicago, and FILE 2015 Brazil.

Samuel received a BFA in sculpture from Missouri State University in 2007. In 2014 he earned his MFA from the School of the Art Institute of Chicago within the Art and Technology department as their full merit scholar. In 2015 he was a Research Associate at School of Creative Media, City University of Hong Kong.