In the development of biotechnology and bioinformatics, the biological process is able to be read, measured, and researched in the formats of information, programs, and codes. Media theorist Eugene Thacker in his book Biomedia (2004) explicated this ongoing recontextualization of a life form that transitions from carbon-based to silicon-based material, as well as the converging of computer science, molecular biology, genetic codes, and computer codes. When a living entity can be interpreted as a medium, the biological process of corporealizing itself is “a process of mediation,” which resonates with Thacker’s principal concept in his media theory that regards mediation as a necessary process for the formation of mediums. From this point of view, a biological system does not function in a reductive manner that would resort to the mechanical Newtonian paradigm. Instead, it evolves in nebulas, myriad particles and related situations that require living organisms to “exist in time, be modulated according to different contexts and situations.”

Entangled: bio/media further explores this condition by rethinking the notion of biomedia. Whereas all entities are in the constant process of grasping and adapting to an unpredictable entropic cosmos, the fluctuating, evolving, and compilable materiality of nature is also reflected in the organization and execution of information, programs, and codes. A unique perspective for the exploration of the biophilic properties of artificial intelligence, electronics, algorithms, and informatics is of great importance. The exhibition Entangled: bio/media is conceived as a contemplation and enactment of this perspective.

The exhibition not only elevates and liberates bioart from an art discipline that works primarily with bacteria, genetic, or transgenic material via technological means, but also responds to urgent contemporary inquiries including transformative substrates and the definition of life, the shifting paradigms of the evolving natural process, the emerging agency mediated by both the biological and technological milieus, and the yearning for a symbiotic relationship between physical beings (so-called nature), technical beings (the artificial namesake), and psychic beings (living things), in order to rethink a Simondonian concept in a post-human world order.

The participating artworks are unveiled progressively throughout the exhibition’s four chapters. The first chapter, Transcoding, explores the intelligence and rhythm of life embodied in inorganic matters (CAO Shuyi), the feedback loop between the plasticity of consciousness and technological iterations (Ani Liu), and the mobility, collaboration, and flow of energy across various species (Anastasiia Raina & HUANG Danlei & Meredith Binnette & Georgina Nolan & HU Yimei). This chapter not only explores whether emotion, perception, and subjectivity can be produced and shaped through codes, devices, and labs, but it also pictures the future bonds between human and non-human entities from the perspective of biocentric design, calling for an open intelligent machine ecology that incorporates reciprocal aesthetics and planetary thinking into Artificial Intelligence and Machine Learning. 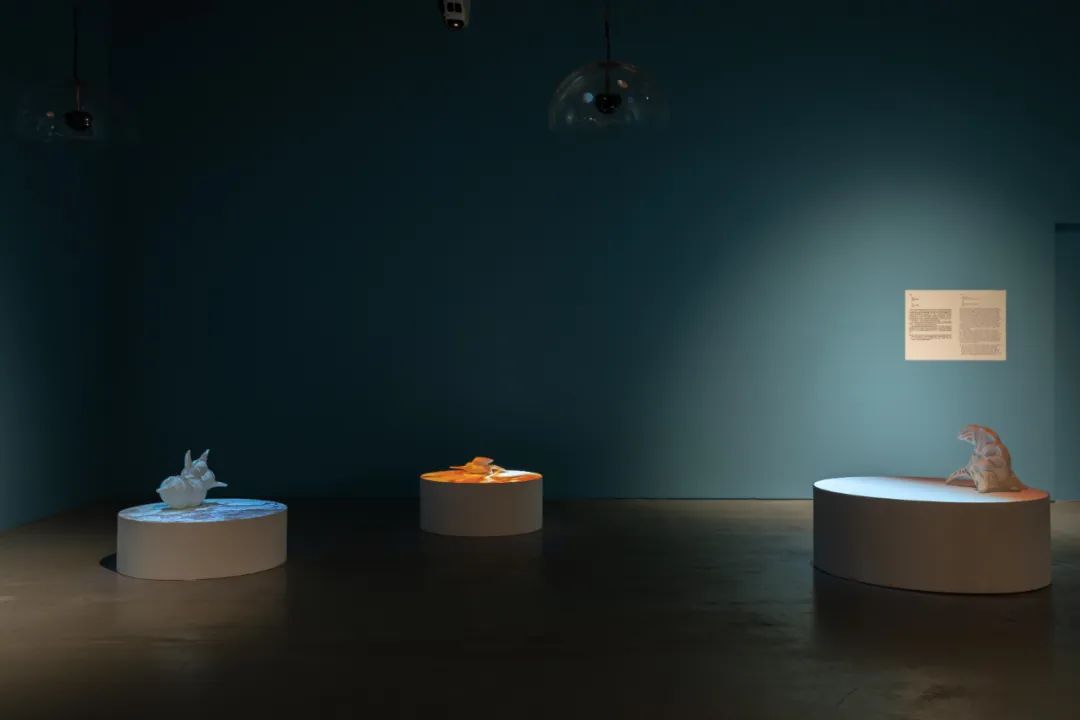 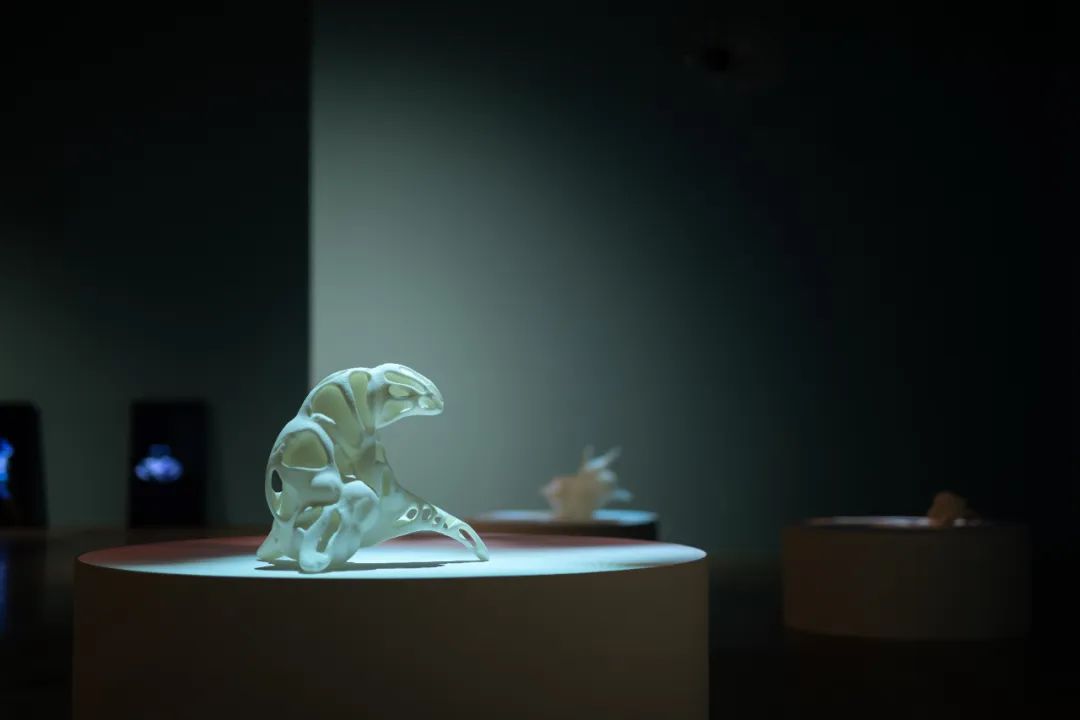 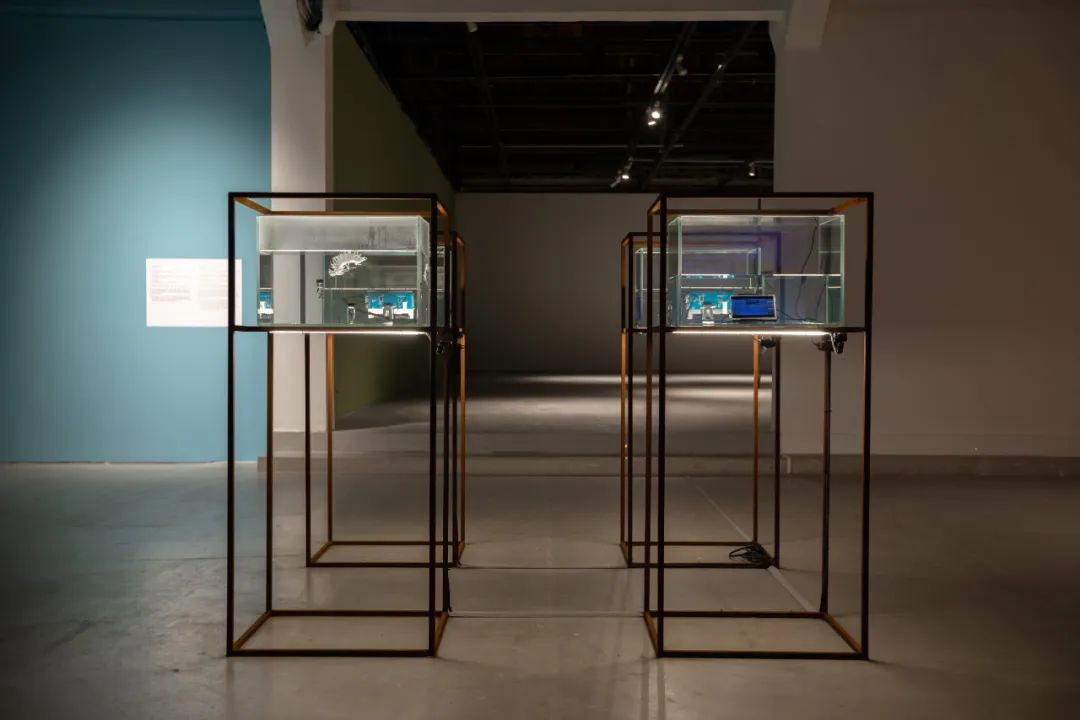 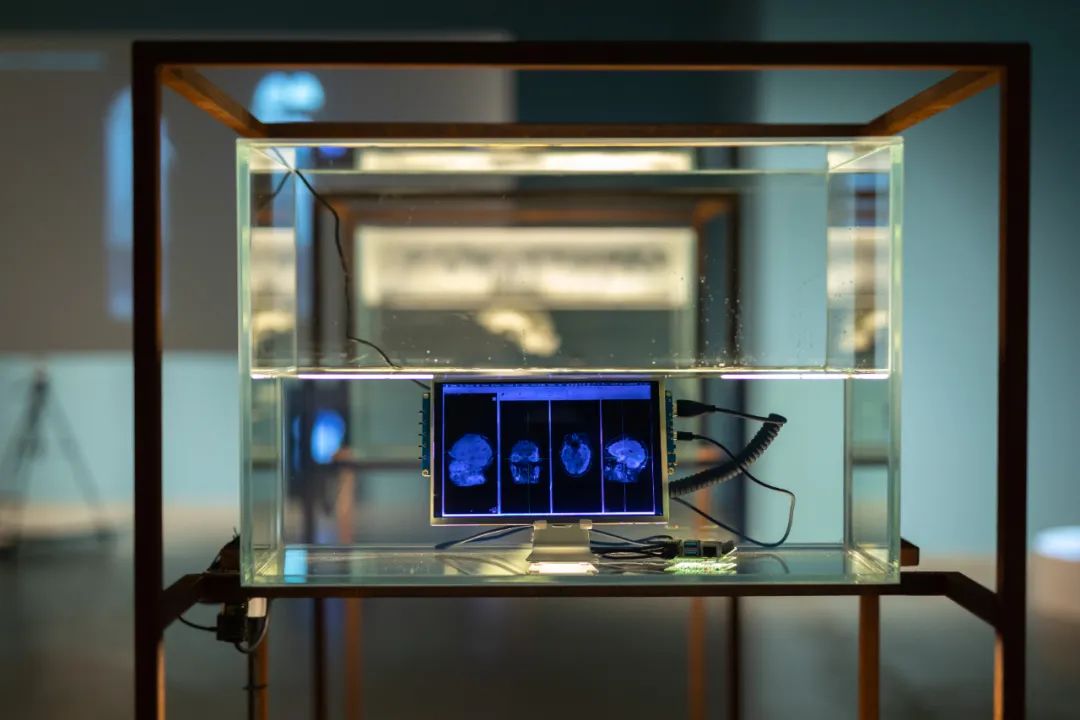 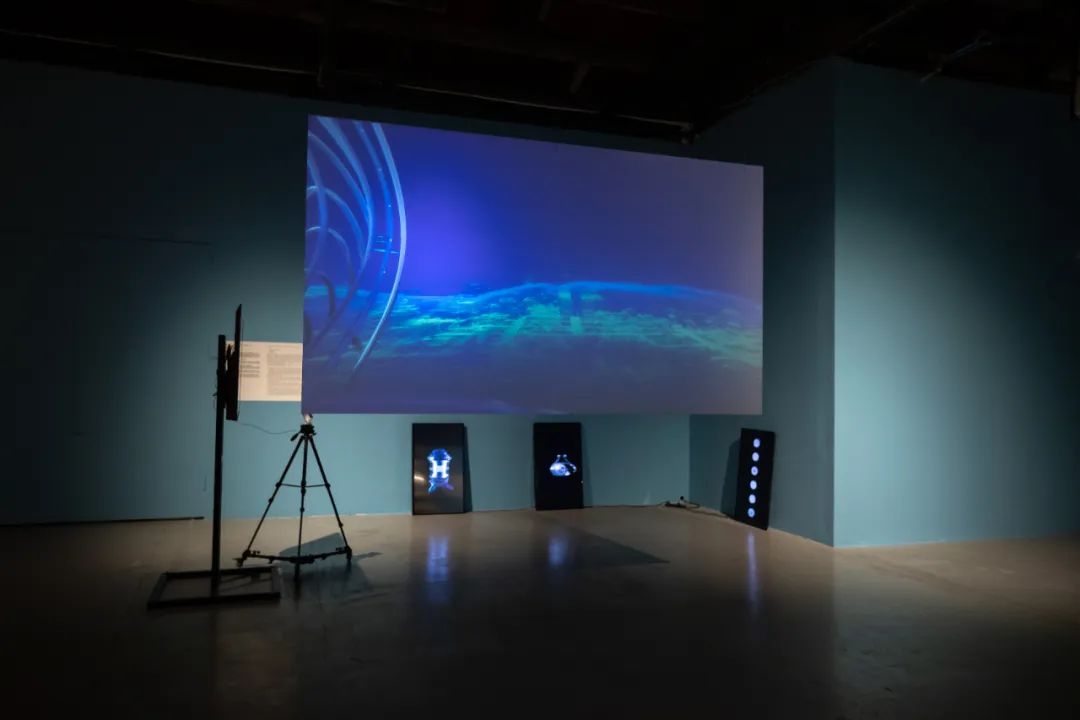 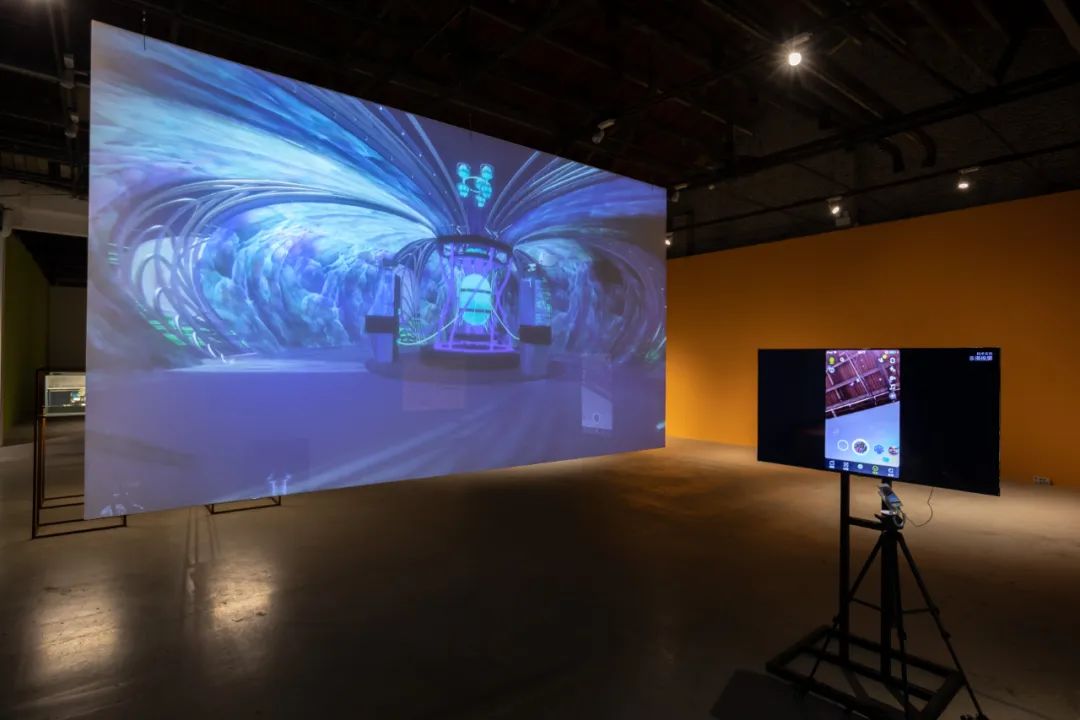 The participating artworks will be unveiled progressively throughout the exhibition’s four chapters. The second chapter "Evolution" assumes that living beings have the ability to act as mediums, and that mediums can take on the characteristics of living beings, how to distinguish between life and code, nature and the artificial, organisms and bits and bytes? Based on the concept of "post-humanity music", Yakushimaru Etsuko's project I'm Humanity considers DNA sequences as a medium for storing music. By converting musical information into the genetic codes of cyanobacteria, I'm Humanity enters a dynamic evolutionary process where not only the musical information is likely to be lost to mutations, but also its cultural message may be derived, altered, and even replaced. KU Kuang-Yi, LO Yu-Chun, and TIEN Zong-Yuan's collaborative work Future Museum of Holy Pig further explores the evolution of biomedia within cultural dimensions. The artists posit a science-fiction scenario in which, after the year 2020, there will exist numerous parallel worlds that cultivate pigs by means of cutting-edge technology, with pigs being on the verge of extinction. Through exchanges of conflicting views, the demonstration of architectural engineering drawings, and their fanciful imagination, this conceptual museum delves into the dynamic relationship between folk customs, technology, and the natural environment. KU Kuang-Yi, LO Yu-Chun, TIEN Zong-Yuan
Future Museum of Holy Pig
4-channel video installation, printing documents, 3D architectural rendering
2020
In third chapter “Agentic Entity”, we will explore the vitality and autonomy presented by nature, inorganic matters, and artificial life as a means of further expanding our understanding of life. Yunchul Kim's Argos considers machines as a non-human agency. This piece is composed of 41 Geiger–Müller tubes, presented as a single living organism, a blinking light that detects particles of the universe. Argos is not a machine of ordinary kind but a dynamic architectural structure in constant interaction between cosmic radiation and vibrational impulses. If Kim's work explores the relationships between metaphor and materiality, then Mads Bering Christiansen and Joans Jorgensen's work rethinks the relationships between language and object. SONŌ explores the impact of language in the realm of human-robot interactions. Based on the artists' research, sound signals are a potentially more effective medium for conveying emotion than vision in social robotics. This work points to the question of “what is life”? What does language/sound mean to life? 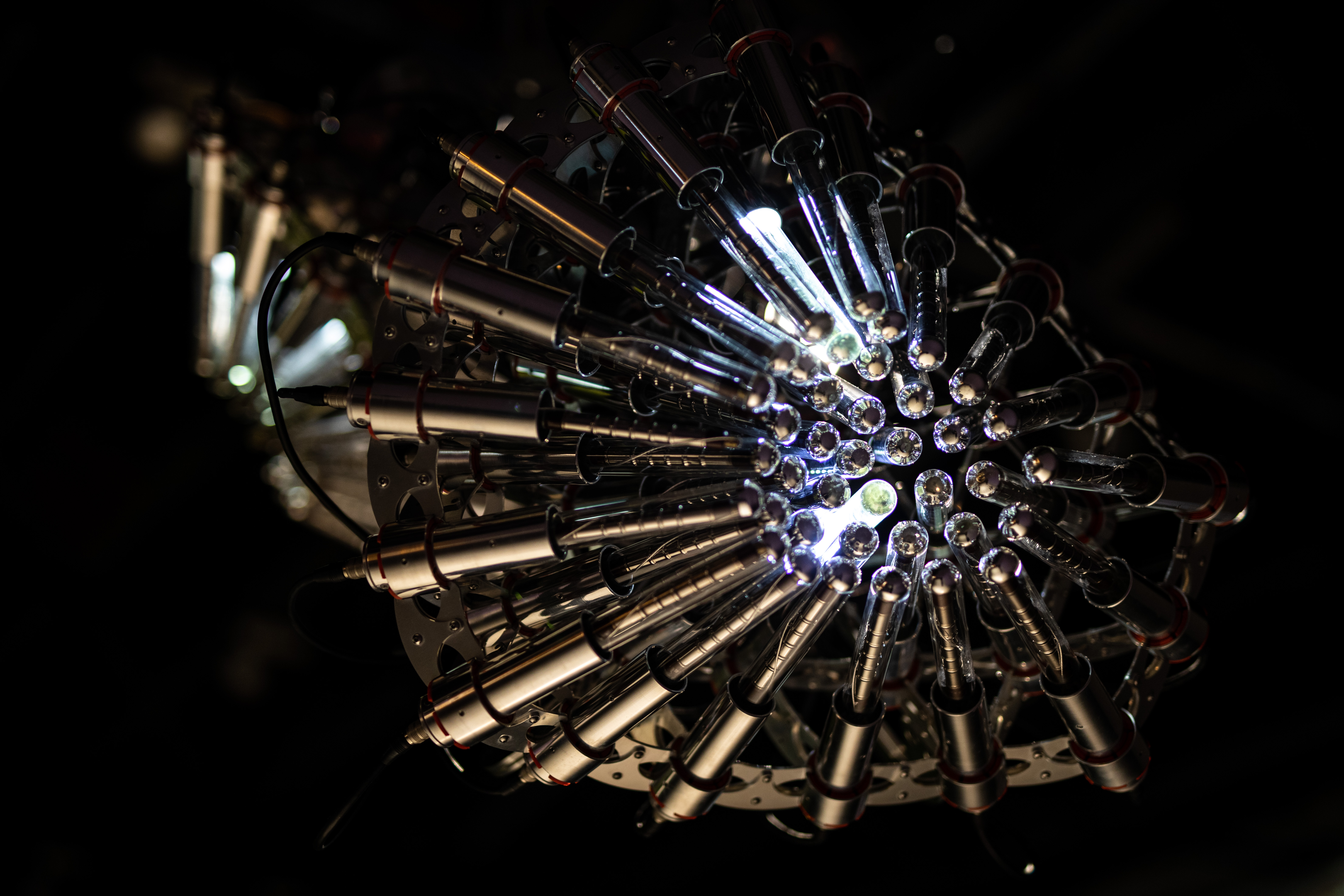 Yunchul Kim
Argos
Geiger Müller tube, glass, aluminium, microcontroller
2018
Iris Xiaoyu Qu’s work, the distributed identity of an artificial landscape, constructs a series of artificial landscape and soundscapes to manifest the embodied experience of an AI system. By revealing the ubiquitous hardware infrastructures hidden beneath the light and smart shell of an AI system, Qu intends to re-trace its identity scattered on earth layer. The project hints at a posthuman turn in which nature and technology entangle with each other. Chapter four "Symbiosis" provides further insight into the convergence and interdependence of organic and artificial life by developing an understanding and discussion of the complexity and recontextualization of the bio-mediated construction of multiple relationships from a systematic perspective.

As a reconfiguration of Condensation Cube by Hans Haacke in 1963-1968, WANG Yueyue’s work Clouds congeal into raindrops falling into the sea reflects an interest in the generative process of autonomy in a technical object and its systematic operation within its fluctuating surroundings, which resonates to the Cybernetics movement in the realm of computation, social and political studies, art, and more in mid 20th Century. Wang rediscovers the interface between biology, ecology and technology by further complicating the interaction between the “cube” and the environment with data from a distant location in the future -- weather forecast data collected from a specific area of the ocean in the artist’s hometown of Qingdao. The fluxing relationship between the self of technology and ecology, one without nature in today, is presented to us in the “cube”. 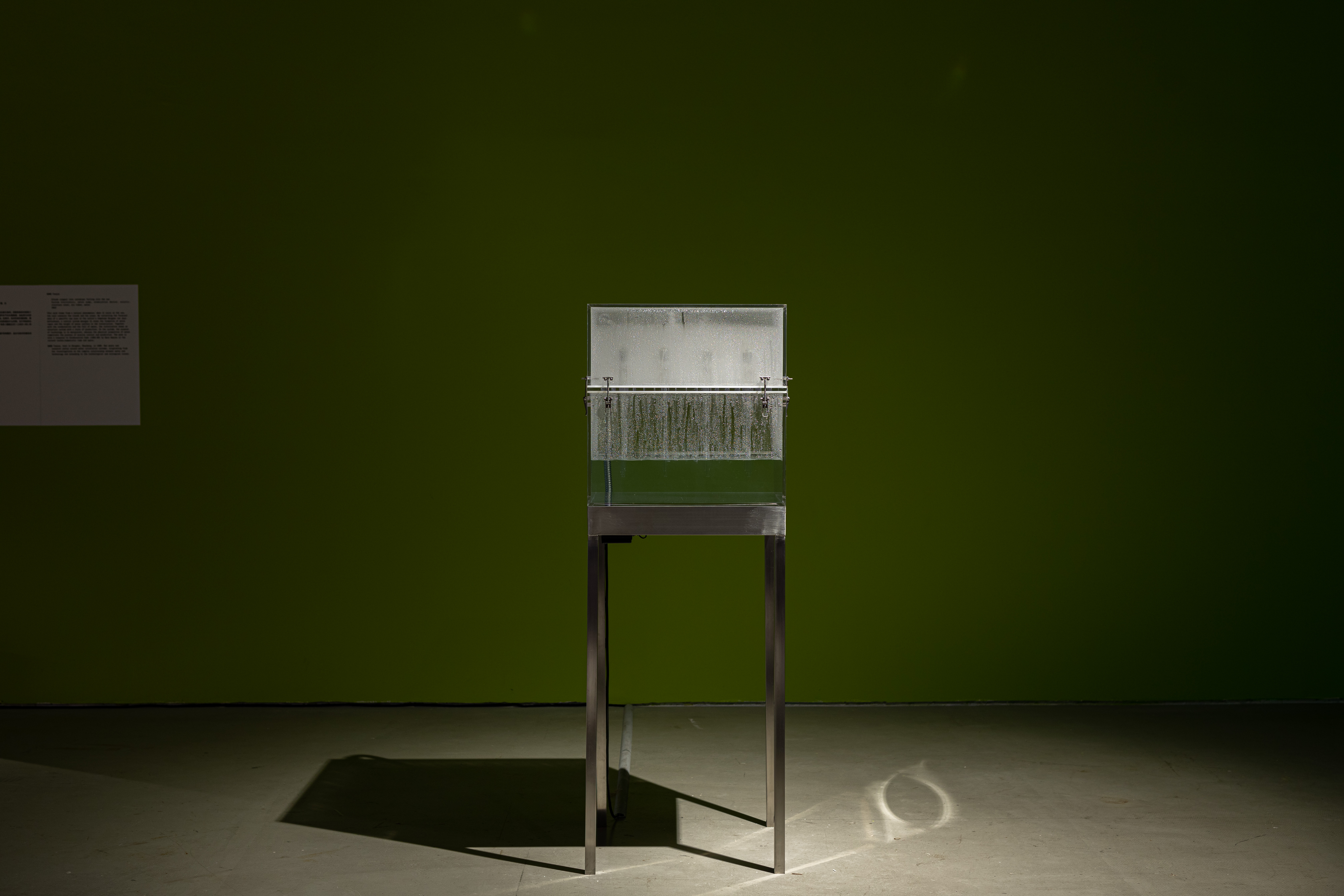 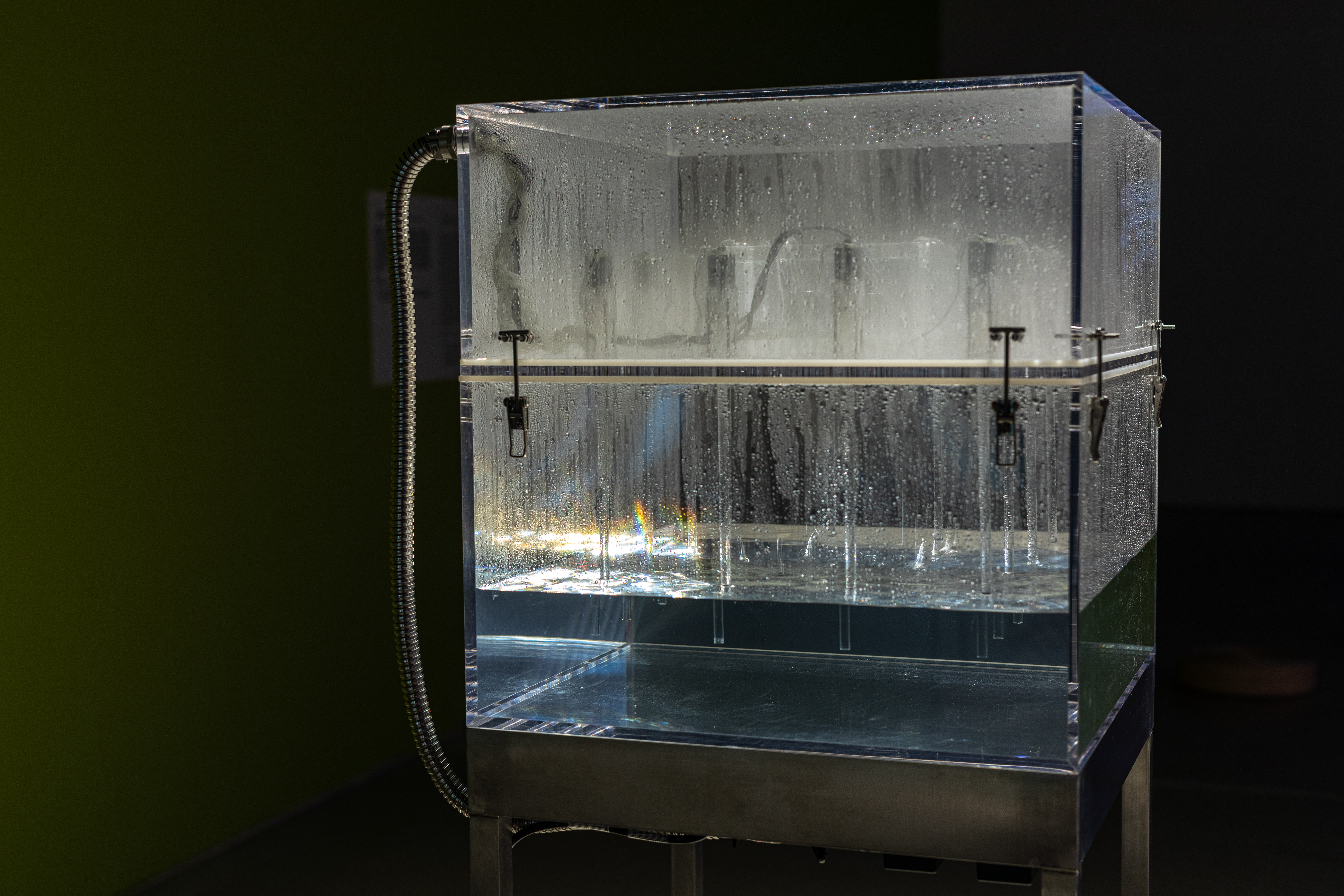 Clouds congeal into raindrops falling into the sea

XI Lei's research project Why Sangyuan Polder? centers around the following questions: what is the role of traditional water-related techniques and technologies today? Do they have the potential to lead us beyond the "land-centrism” that has underpinned the evolutionary process of modern technical objects? By focusing on the internal tensions existing between traditional and modern technological water infrastructures, this project extends the discourse of the anticipated symbiotic development powered by technology and integrated with nature in relation to social and economic values. Meanwhile, in Rootless Tree, XU Haomin takes another step further to question the conception of symbiosis, as it may be another utopia framed by human desire. The piece presents a bleak scenario with an uprooted tree, noises, and compressed chaotic images reflecting a dark ecology that urges us to rethink the conventional way of knowledge, as maintained by humanity. Are human beings really capable of grasping geological deep time and the accelerating development of technology? Does our manipulation in fact verge on failing? For co-existing, maybe the time has come to discuss a new way of knowing for the attunement within the self and the other, the norm and the abnormal, and human and non-human relationships. Thacker states in Biomedia that biology has become ever more biological through the mediation of technology. The corporealization of nature is strengthened across different substrates. Technology, on the other hand, emerges a kind of “self” transcendence beyond the dualism of nature and technology through the mediation of biology/nature, which learns to “exist in time” together with biological beings in this entangled world. Based on this vision of the “co-naturality” between the natural and technological milieu, the exhibition Entangled: bio / media narrates a parable of paradigm-shifting reality, seeking the potentials of all beings comingling and co-existing in symbiosis, thus to witness the emergence of an unique selfhood of each cohabitant.

The participating artworks are unveiled progressively throughout the exhibition’s four chapters. From July to October, a new chapter was announced in each month. Entangled: bio/media as a 'living' entity, grows on its own at CAC.