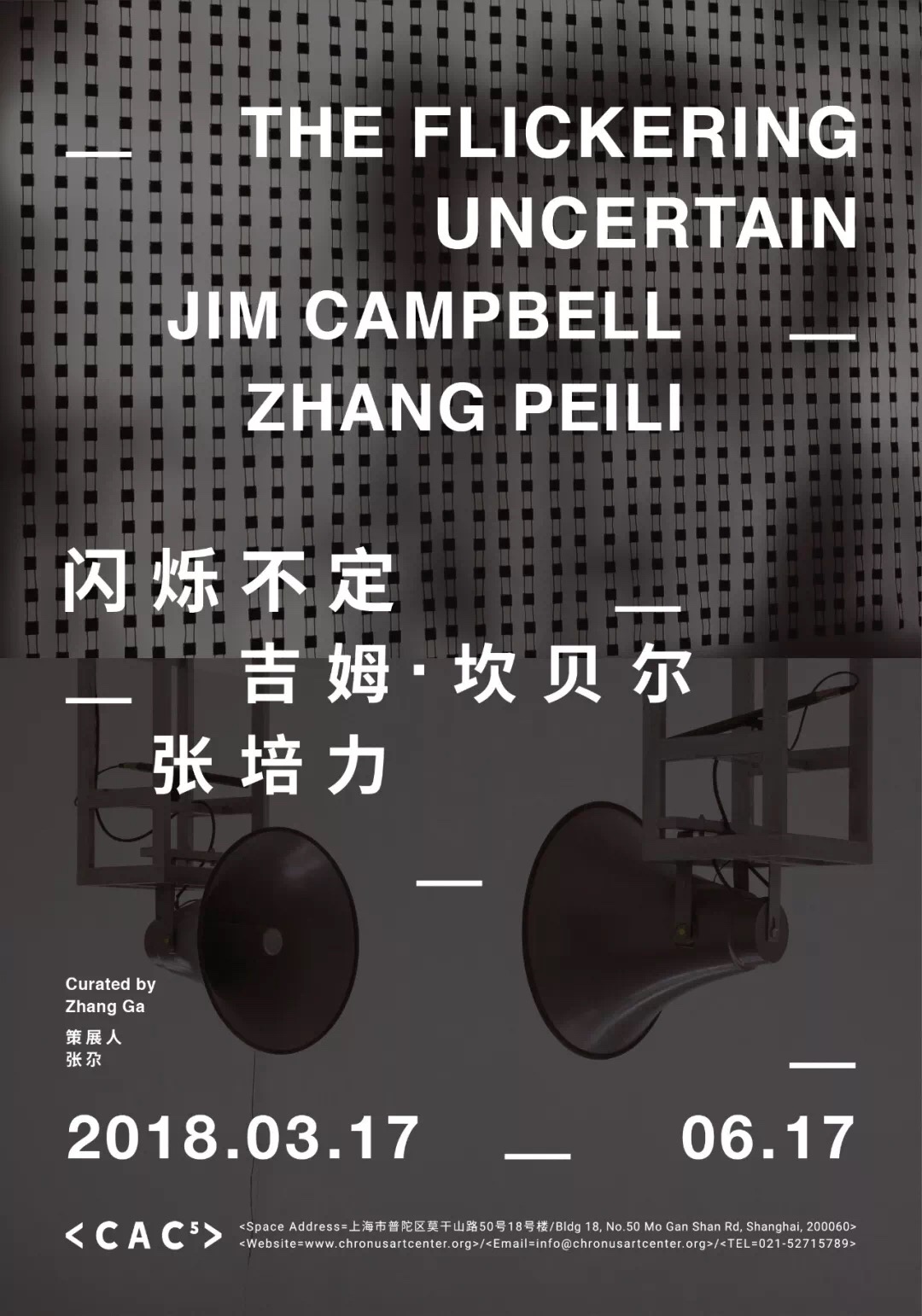 Chronus Art Center is pleased to present Jim Campbell & ZHANG Peili: The Flickering Uncertain, an exhibition by two pioneers of media art, and the first solo show for the San Francisco based artist in China. The duo solo exhibition also marks the inauguration of a series of programs in celebration of CAC's 5th anniversary and will open on March 17, 2018 with a dialogue between ZHANG Peili and ZHANG Ga, curator of the exhibition and remain on view through June 17, 2018.

Five works from Campbell's signature Low Resolution Works series occupy the first gallery and a singular work of monumental scale titled Collision of Harmonies by ZHANG Peili will be mounted in the second gallery. Although strikingly heterogeneous, the affinity between the two artists lies implicitly in their shared interest in invoking an aesthetic experience by employing “low resolution” both as a visual device and as a perceptual agent, rendering an embodied looking / seeing, seeking to grasp the technological and psychological intricacies of reality. Like much of Campbell's work, perception is contingent on distance and, according to an inverted logic, the closer one approaches the object in question, the more illusive it becomes. In the shadowy grisaille of Exploded View and Exploded Flat Campbell implicates a kind of silent reverberation, changing one's distance makes the flickering object ambiguous or perceptible. On the other hand, departing from his screen-based practice, ZHANG Peili's Collision of Harmonies for the first time employs sound as a kinetic apparatus to activate machine collisions for an operatic climax. Instead of human-machine interactions and a viewing pace hinged on proximity, here the dramatic encounter of two megaphones from opposite side of a hanging rail gradually approaching each other singing a duet of female and male voices and causing a pile of neon tubes to flare and extinguish until the two megaphones come to a stand-off midway, exploding into a thundering abstraction and dazzlingly white light as if the harmony is pixelated into fragments of destruction. In Campbell's words, “low resolution moving images are analogous to sound. Sound is defined by movement and as such, the more a sound is slowed down, the more abstract it becomes.” Might we also find here that ZHANG Peili's forceful collision of harmonies is yet another experiment of low resolution uncertainty?

He has two Bachelor of Science Degrees in Mathematics and Engineering from MIT and as an engineer holds nearly twenty patents in the field of video image processing. A monograph of his work, Material Light, was published by Hatje Cantz in 2010.

ZHANG Peili (b. Hangzhou, 1957) graduated from the Department of Oil Painting at Zhejiang Academy of Fine Arts (now China Academy of Art) in 1984, where he is now a professor. He is also the executive director of OCAT Shanghai. Zhang currently lives and works in Hangzhou.

In 1985 and 1986, he organized and participated in the "'85 New Space" exhibition and artist collective "Pond Society" activities. His major works include Rest, X? series, 30x30, Water: Standard Version from Cihai Dictionary, Document on Hygiene No.3, Last Words, A Gust of Wind and Collision of Harmonies etc.. Zhang is mainly engaged in works with the media in video, text, sound installation, mechanical installation and photography, along with art education and administration.

ZHANG has held solo exhibitions at renowned institutions such as Art Institute of Chicago and Museum of Modern Art New York, and he participated in Venice Biennale three times. His works are also shown in several important international exhibitions such as Lyon Biennale, Sydney Biennale, Gwangju Biennale and Shanghai Biennale.