Chronus Art Center (CAC) warmly welcomes Samuel Adam Swope as the recipient of CAC Research/Creation Fellowship 2016 Fall to conduct his three-month residency in Shanghai. During his residency, starting from September to December 2016, Swope will be developing a research based aerial artwork titled Floating Room with <CAC_Lab>fellows and researchers. The project result will be presented as an exhibition in conjunction with an artist talk and a workshop at CAC space in December. Time and venue will be announced at a later point.

Samuel Adam Swope is an artist most recognized for his Aerial Art and for inventing novel situations with artistic merit. Samuel feeds off his innate boyish curiosities, imagination, and mischievous behavior. He follows heuristic methodologies and seriously plays. He fancies apparatuses with aesthetics, craft, and technique, but that maintain a core concept related to science and whimsy.

His continued interest in contemporary uses of apparatuses, performance, technology and DIY culture has enabled him to exhibit and lecture internationally in art spaces and academic and cultural institutions, for example ISEA 2016 Hong Kong, Este: Coordenadas Itinerantes Colombia, Nightingale Chicago, and FILE 2015 Brazil.

Samuel received a BFA in sculpture from Missouri State University in 2007. In 2014 he earned his MFA from the School of the Art Institute of Chicago within the Art and Technology department as their full merit scholar. In 2015 he was a Research Associate at School of Creative Media, City University of Hong Kong. 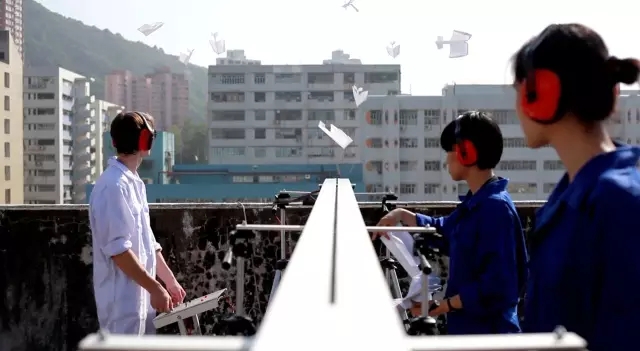 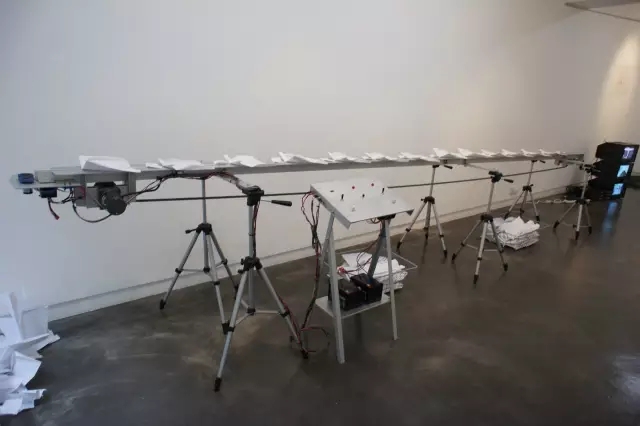 ta-ta-ta-ta-ta-> is a guerrilla performance with urban behaviors. The work looks into the ritual of flyer distribution in Hong Kong. Such phenomenon can be reduced to a three part formula: Input, obstruction by the distributor; Process, the confronted decides between engagement and avoidance; Output, action. This public performance challenges social reflexes by replacing the cue with the ta-ta-ta-ta-ta-> apparatus in everyday interactions. Assembled full length, the 10 meter handmade apparatus can launch 30 paper airplanes in 7 seconds.

The public location chosen for the happening was Fo Tan, Hong Kong, an industrial district where workers flock towards their jobs. On the morning of June 5, 2012, the apparatus length was shortened for a covert operative. Flying and descending paper airplanes, which were rapidly launched for just over 45 minutes, met the workers ascending the valley towards their daily job.

The choreographed rooftop performance and the actions recorded at street level were documented through video. The footage was composed into a 16 minute short, which tells the story and experience of the social and spatial intervention, ta-ta-ta-ta-ta->. 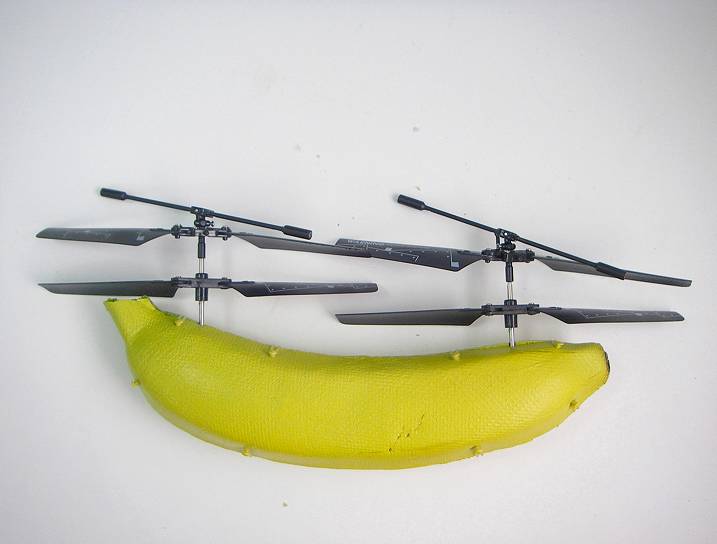 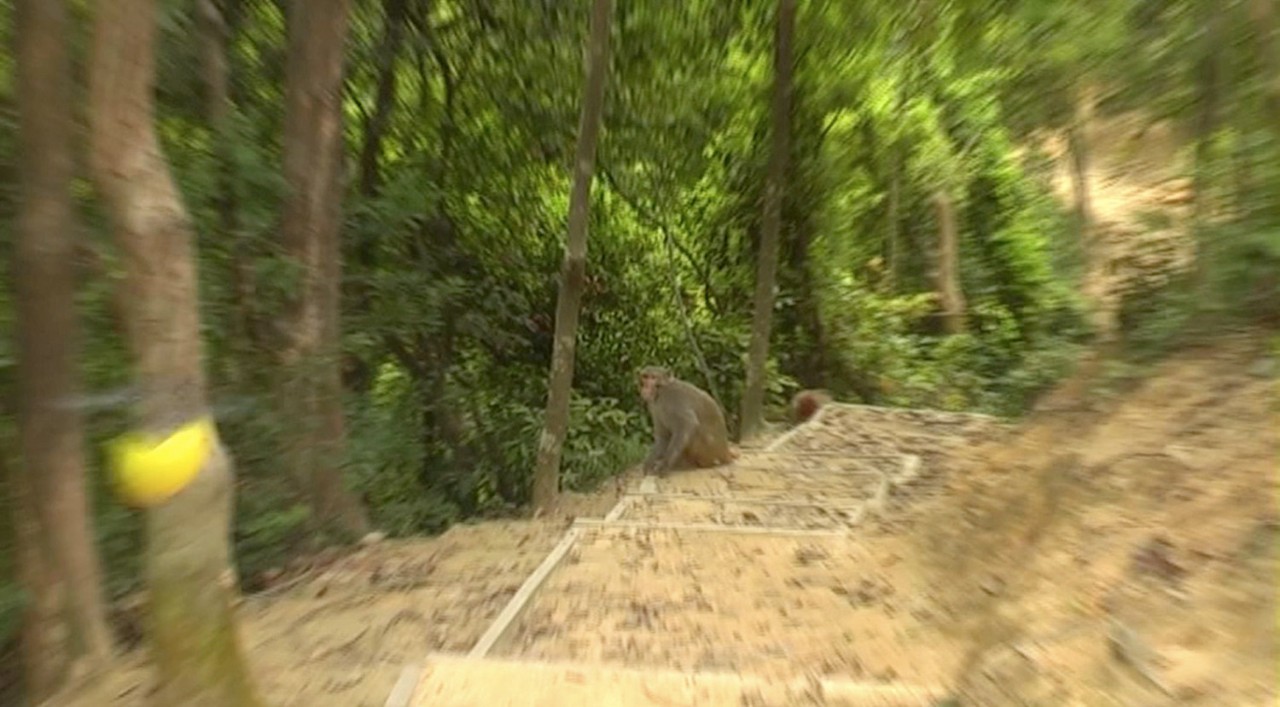 Banana ‘copter is a unique aerial artwork. It is a flying banana, a technological-natural hybrid created for BANANA MISSION: a monkey behavioral study. BANANA MISSION was filmed in a variety of locations around Hong Kong including Kam Shan Country Park, a place where feral rhesus macaques live. It is at Kam Shan where Banana ‘copter and the monkeys meet. What the results would be was unknown, but once captured, the video was edited to best reflect human perception of the recorded behaviors. This work plays with the intersection of technology and the non-human, and through an anthropomorphic lens explores humoristical first encounters.

This work intentionally did not follow an ethological approach that studied the feral rhesus macaques and their behavior with the flying banana at greater length in order to fully understand the impact that the technological-hybrid had in their community. This artwork is more of an intervention than a behavioral study. As an intervention, the macaque reactions are imagined and storytold rather than conveyed as scientific fact. The title “a monkey behavioral study” was used to give the artwork a semi-scientific aura. 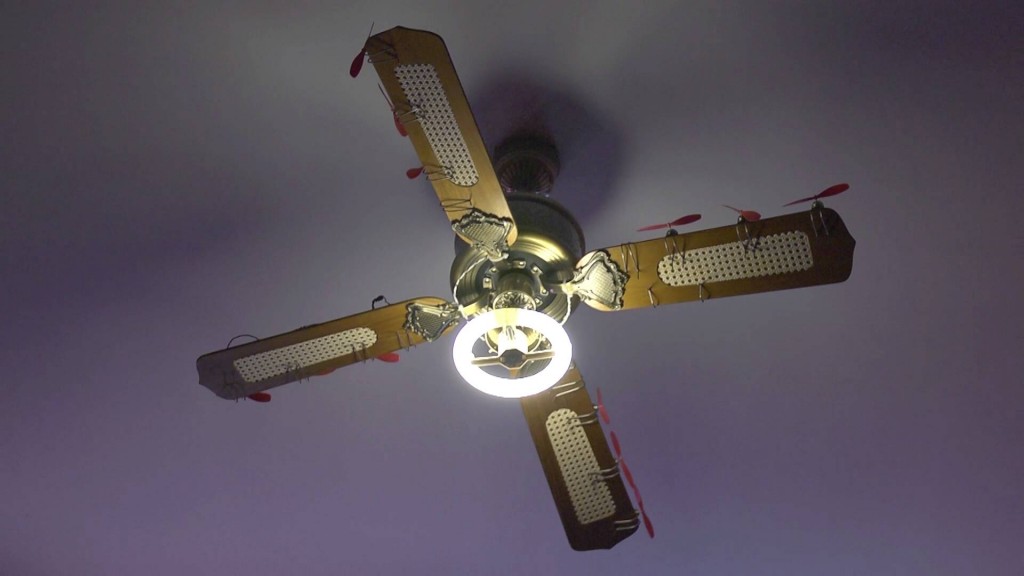 Dead Air - A dead [broken] ceiling fan is brought back to life with 12 little propeller fans that work together. The little fans push and pulse so that the bigger fan can circulate air again, like shanties turning a capstan. The 12 little fans run on a 7-minute program that is looped. The program is designed for longevity and choreographed sound; air becomes the instrument to the perceived sound. Once the dead ceiling fan turns again it continues circulating until the propeller fans’ cell energy dies.

The first mechanical, electronic performance was recorded at 6018NORTH of Chicago in 2014, which is an old house dedicated to innovative art and culture and so happens to have two old identical ceiling fans - one of which is dead [broken]. The choreographed performance began with the rebirth of the dead ceiling fan and ended when the apparatus that resurrected it ran out of energy. The electronic performance lasted just over 4 hours. 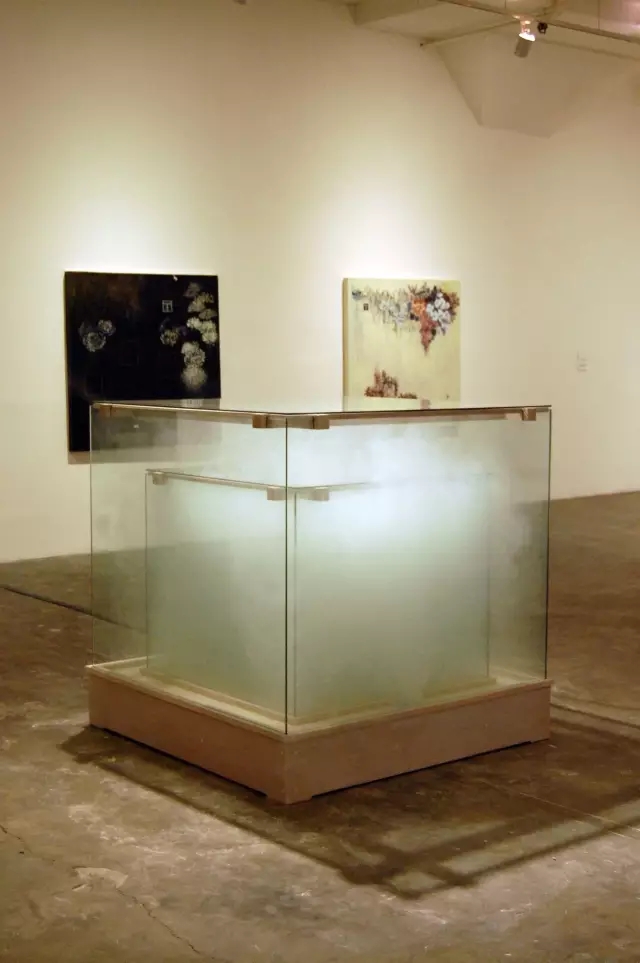 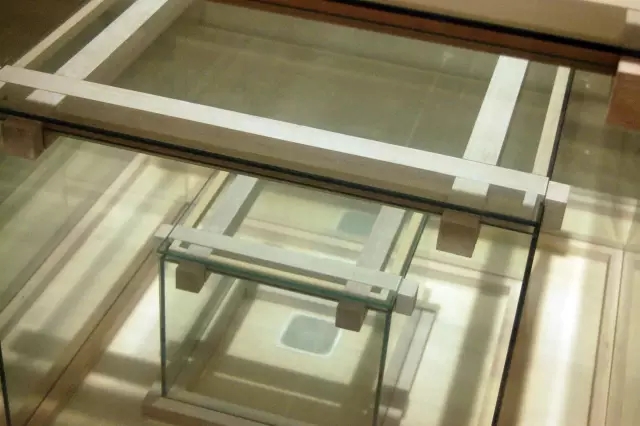 Untitled frames the airy movement of scented smoke in an architectural design based on the matryoshka doll. Each layer is filled with smoke sequentially. After all layers have been filled and obscured with the scented smoke, the full volume is blown out into audience space, which is then breathed in by the viewers and atmosphere. Programming operates the time-based apparatus, but on opening night Samuel controlled it with two tiny remotes in his pockets.