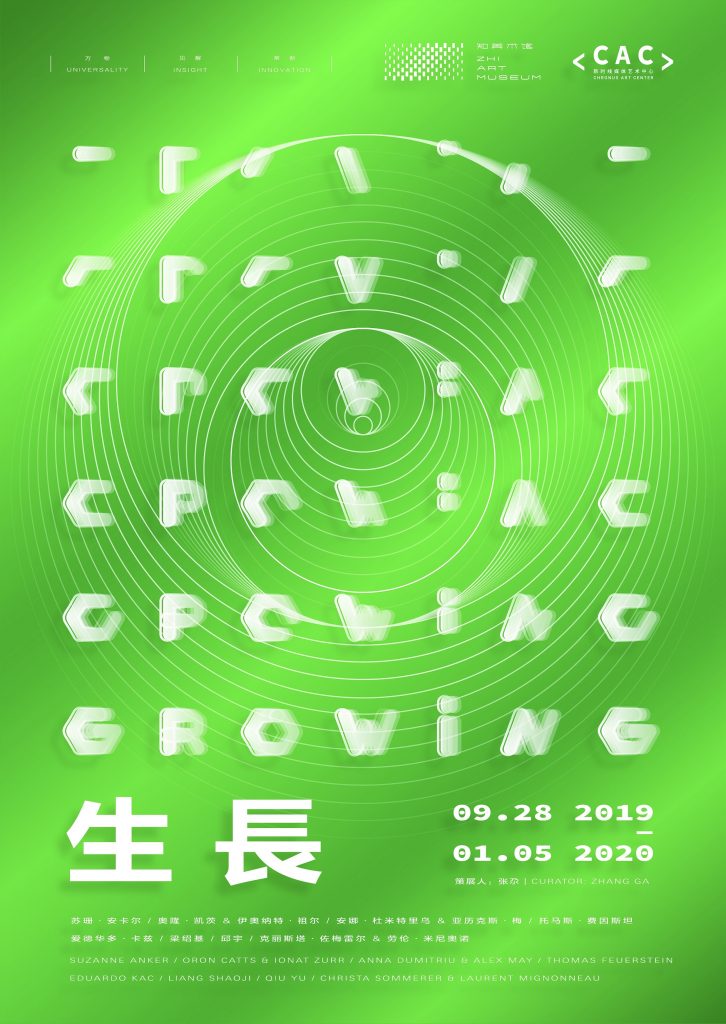 Expanding upon the show previously mounted at Chronus Art Center in Shanghai, Growing ZHI, presenting eight artists /artist collectives, further dissects phenomenology of the living and the growing into the precarious zones of the uncanny, the borderline between the animate and the subliminal through the lens of the techno-fantastical, foreshadowing a future which is as fascinating as it is ominous.

Susanna Anker’s 2019 work Afterlife of the Particles conjugates specimens from the natural world and items from the industrialized domain, in which an in vitro cityscape embraces a myriad of objects, orchestrating an assemblage of air-dried foods, traditional Chinese medicinal herbs, medical pills, rubber bands, pastel crayons, screws, metal clips and numerous other live or immobile objects encased in petri-dishes as if a laboratory re-engineering may forge a new meaning of symbiosis for the organic and the artifact. 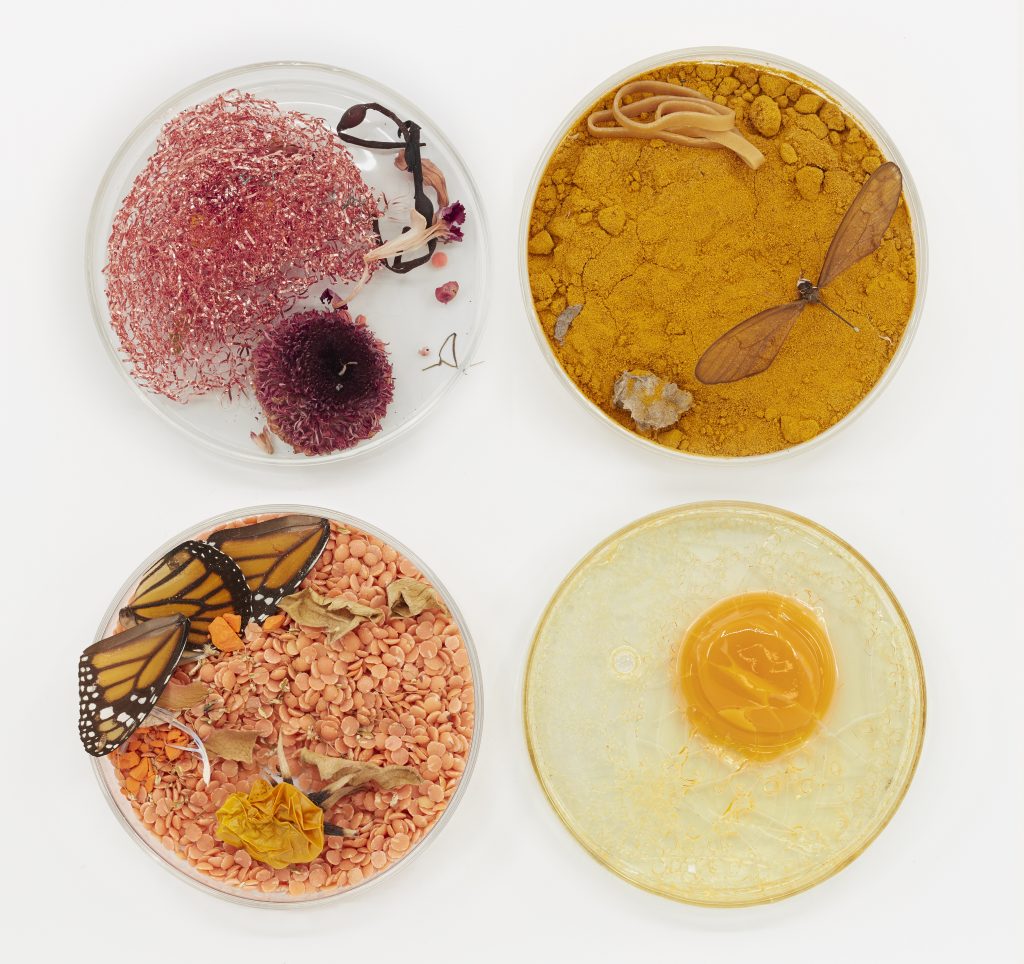 Suzanne Anker: The Afterlife of the Particles, 2019. Courtesy the artist

Visitors discover a photographic work exhibiting a flowering petunia. Unassuming as it seems, the image depicts the first blossom of an inter-species artwork: Edunia, a hybrid of the artist Eduardo and the petunia plant, whose red veins are vivid expressions of the artist’s DNA.  Over the course of the exhibition, a flower pot planted with the seeds of Edunia will eventually bloom to reveal the Natural History of the Enigma, also the title of this work series by the artist. 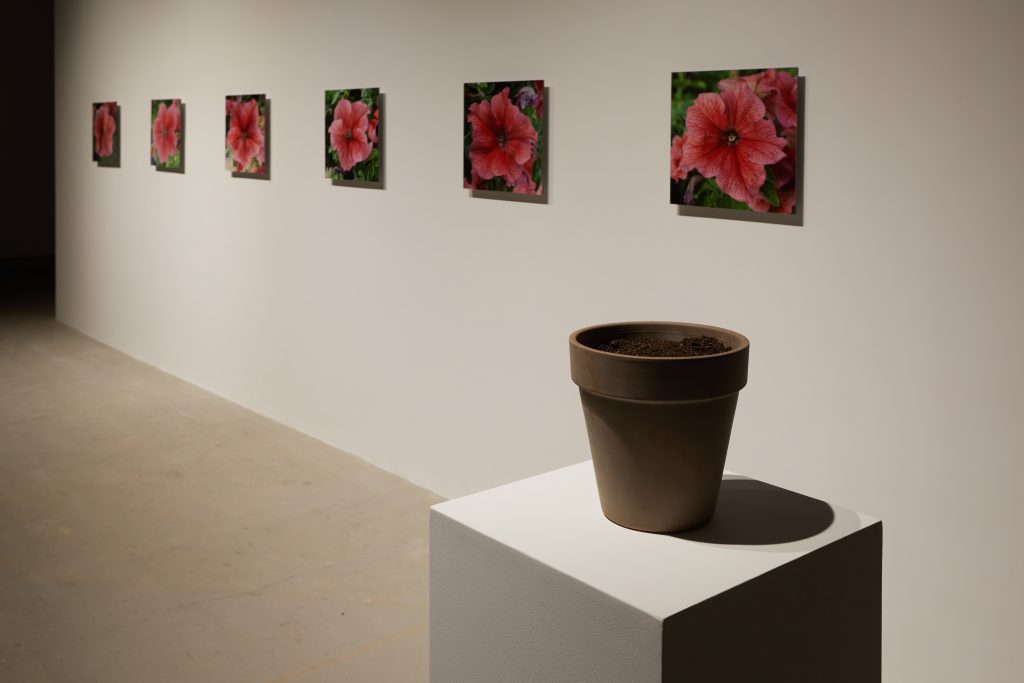 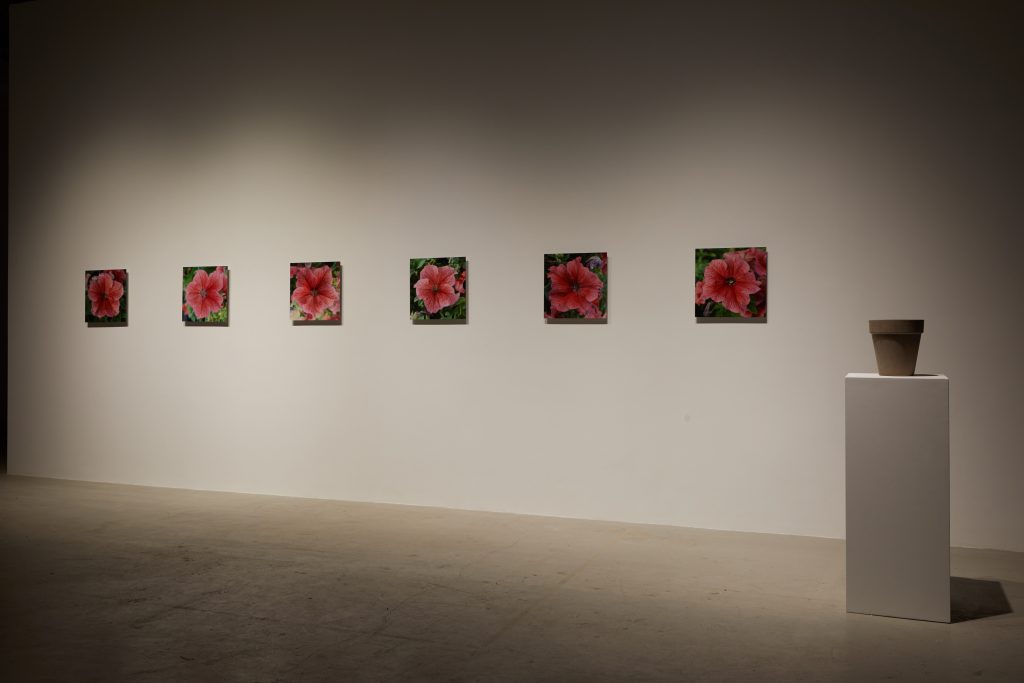 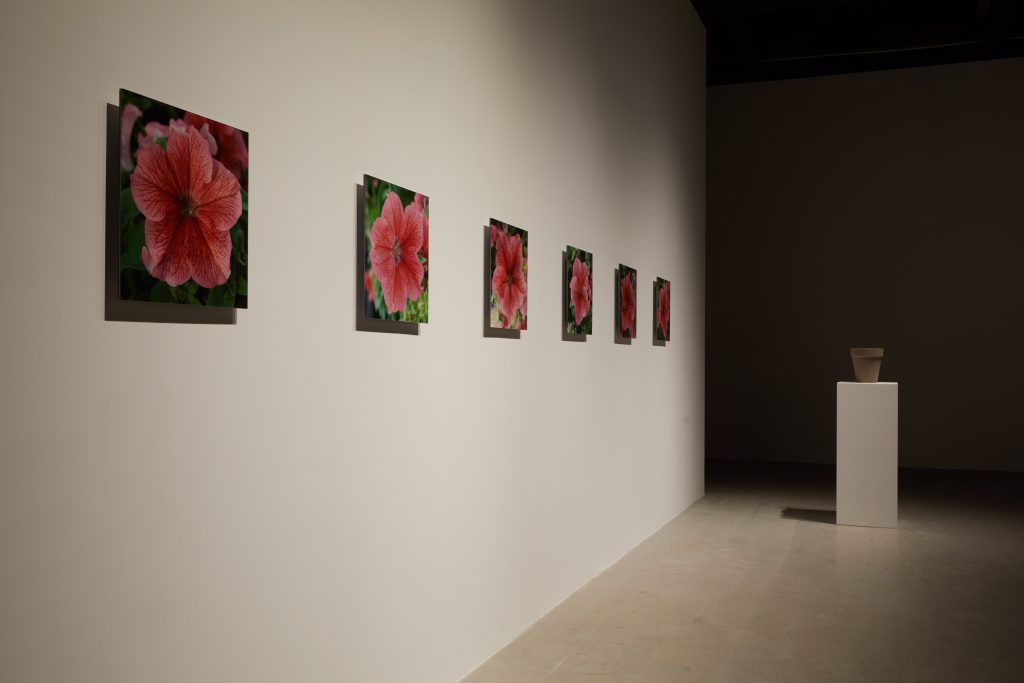 Titled Vessel of Care and Control, the controversial SymbioticA duo, Oron Catts and Iont Zurr, in collaboration with Davon Ward stage a tissue culture incubator which is provisioned by CO2 or thermostatic conditions administered by a host of decayed organisms from biodegradable compost in situ. The artists once again stir up a contestation about the role of technical utility, insinuating a provocative perception of an incubator both as a contraption of care/nurture and controlled life as well as a conceptual and biopolitical apparatus. For the ZHI museum iteration, two immaculately fabricated, minute works are supplemented to cast a surgically sanitary contrast with the monumentally heath-fermented pyramid. The Butlerian title (for art is like a living organism)… Better Dead Than Dying gives away the metonymy implicated in the living immortalized cell-lines which the work perpetuates – a zombie state of forever living and forever dying, as if a conundrum of modernity.  In Mechanism of Life, the SymbioticA collective invokes a poetic imagery of the emergence of life in the form of a protocell: a blob of the primordial impulse to grow, although bio-engineered, that is transient and aloof, beyond the grasp of actuality. The work thus insinuates a way of critiquing the cultural amnesia impinging on contemporary memory. 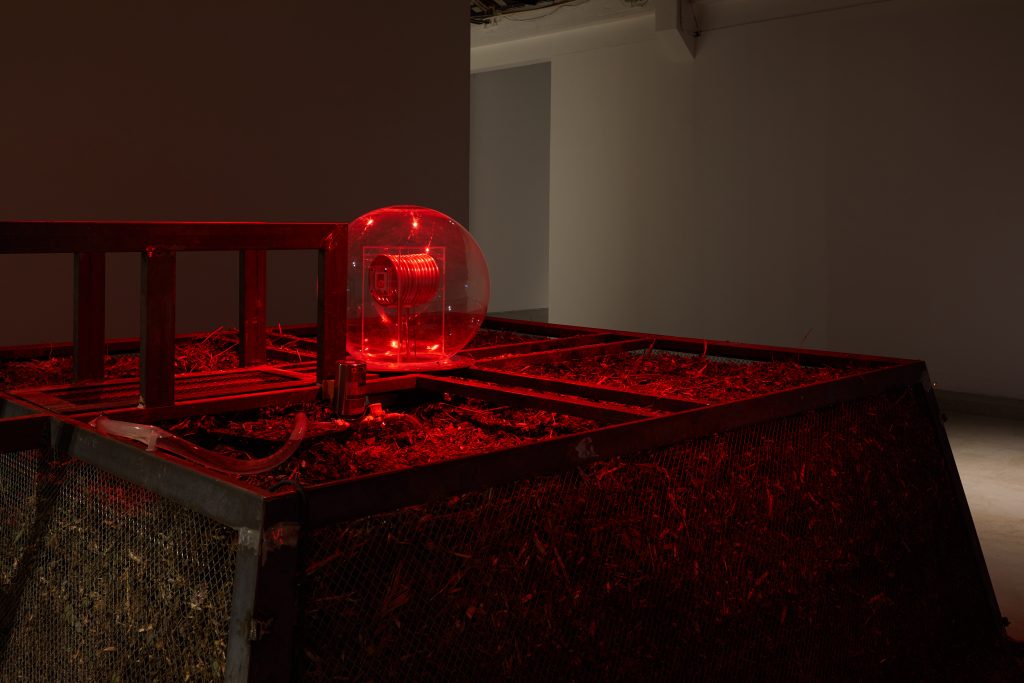 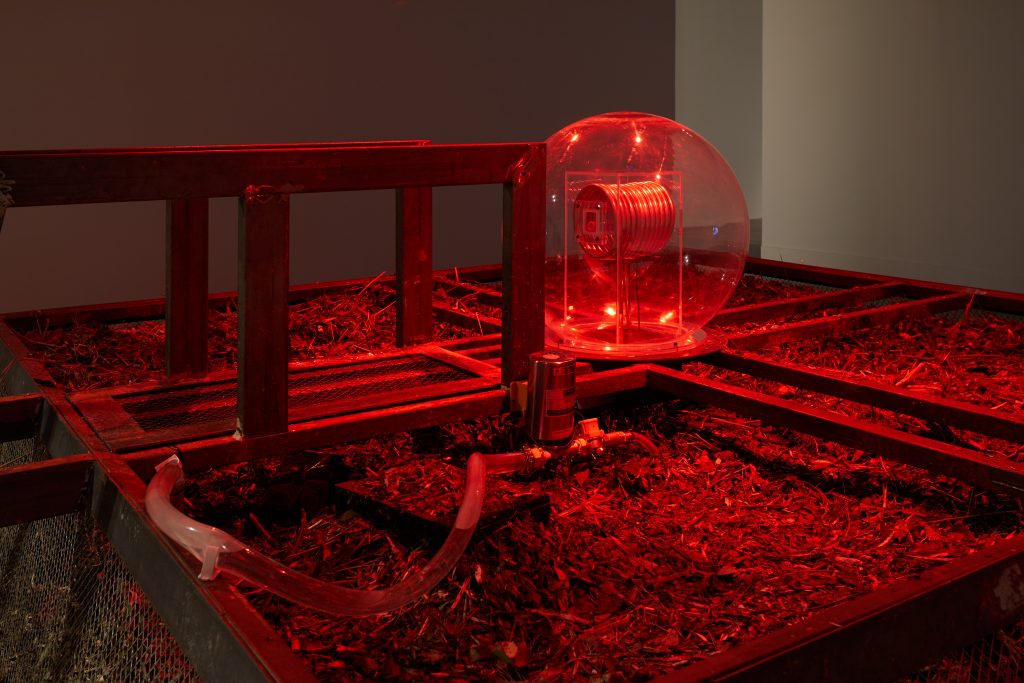 LIANG Shaoji presents a body of work that delineates and encapsulates his long fascination with the life cycle of silkworms.  Employing various media from the unfettered natural process of the worm’s growth and withering, to an electronically augmented gamut of cocooning and producing silk, further radicalized by the genetically altered invertebrates emanating GFP luminosity, the ensemble reaches its climax when the silkworms begin to spit out seas of satiny threads during the cause of the exhibition. 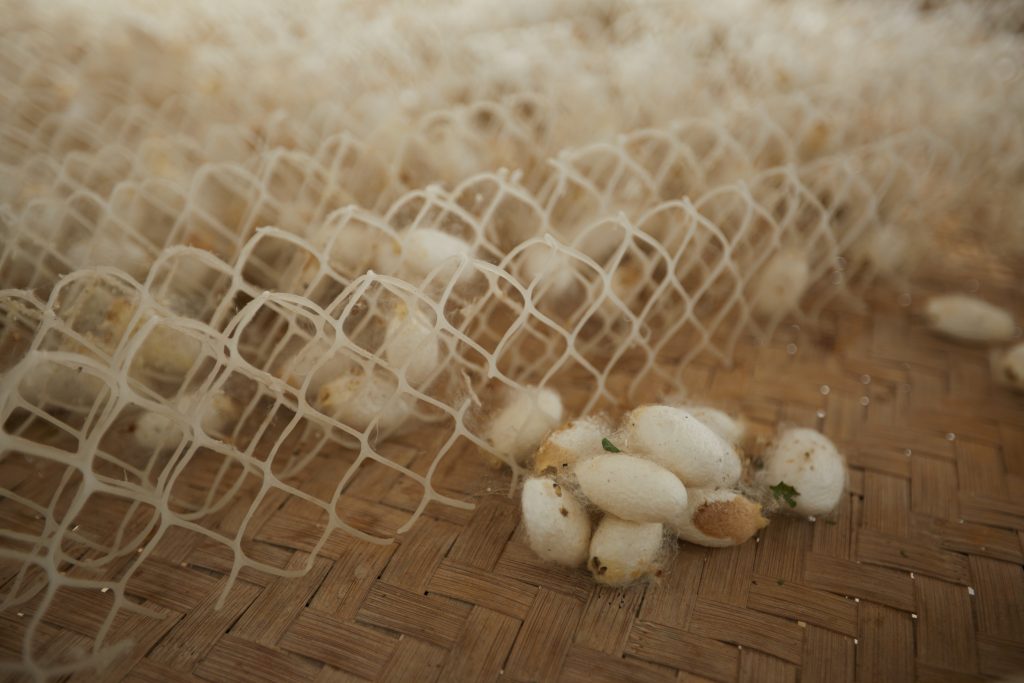 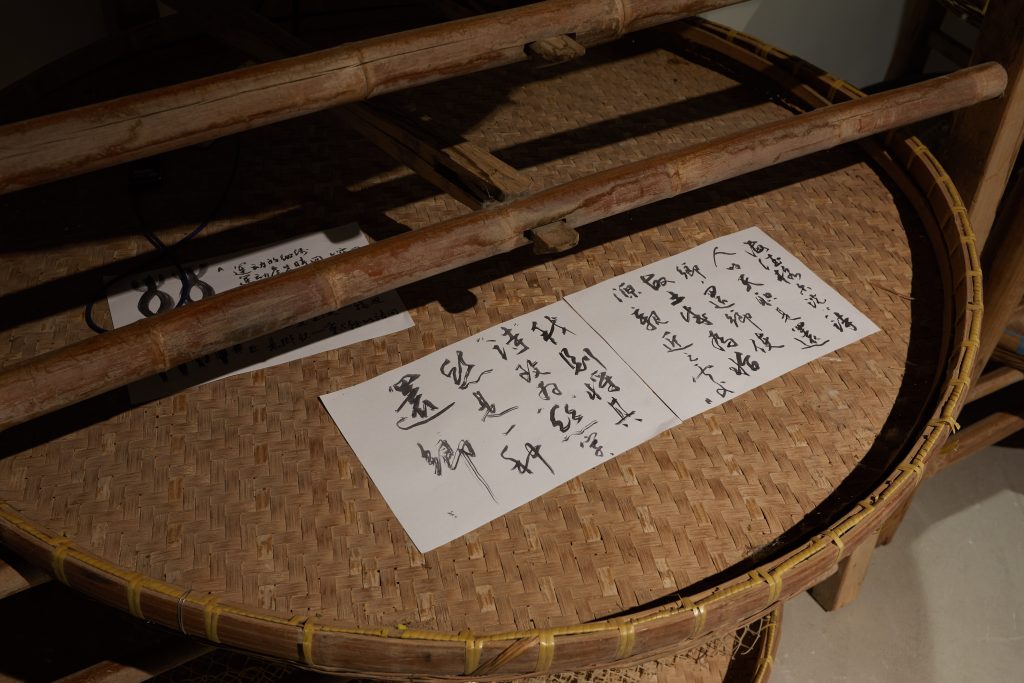 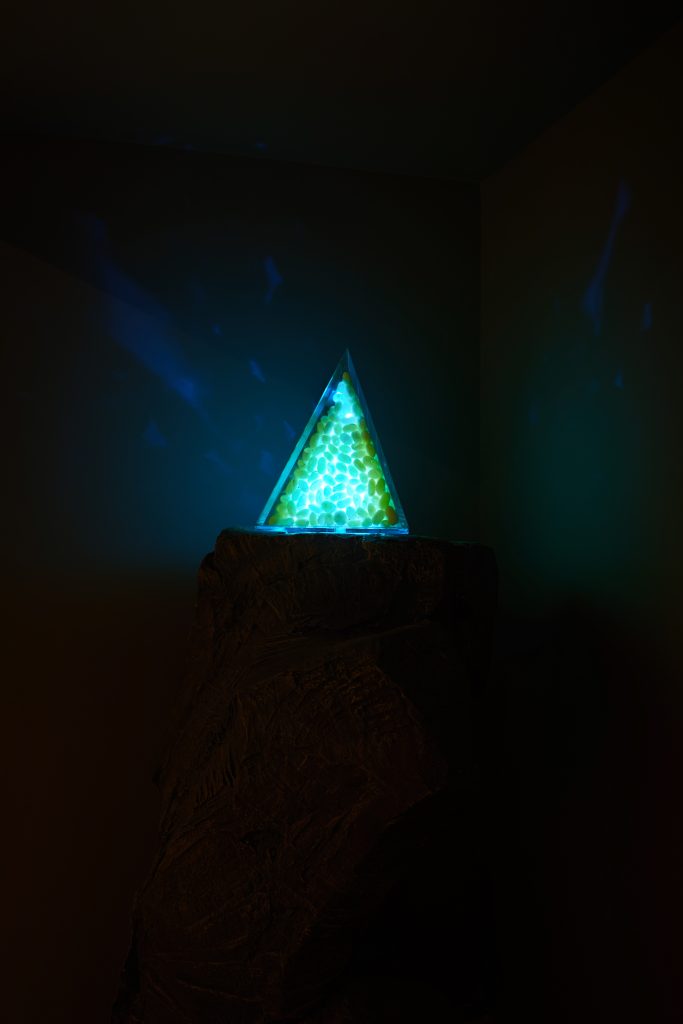 The virtual and the physical find their theatrical staging in an assemblage literally called Interactive Plant Growing in which Christa Sommerer and Laurent Mignonneau create an intuitive process where the real affects the virtual, 3D rendered by corporal touch, evolution thus takes on another form of development. 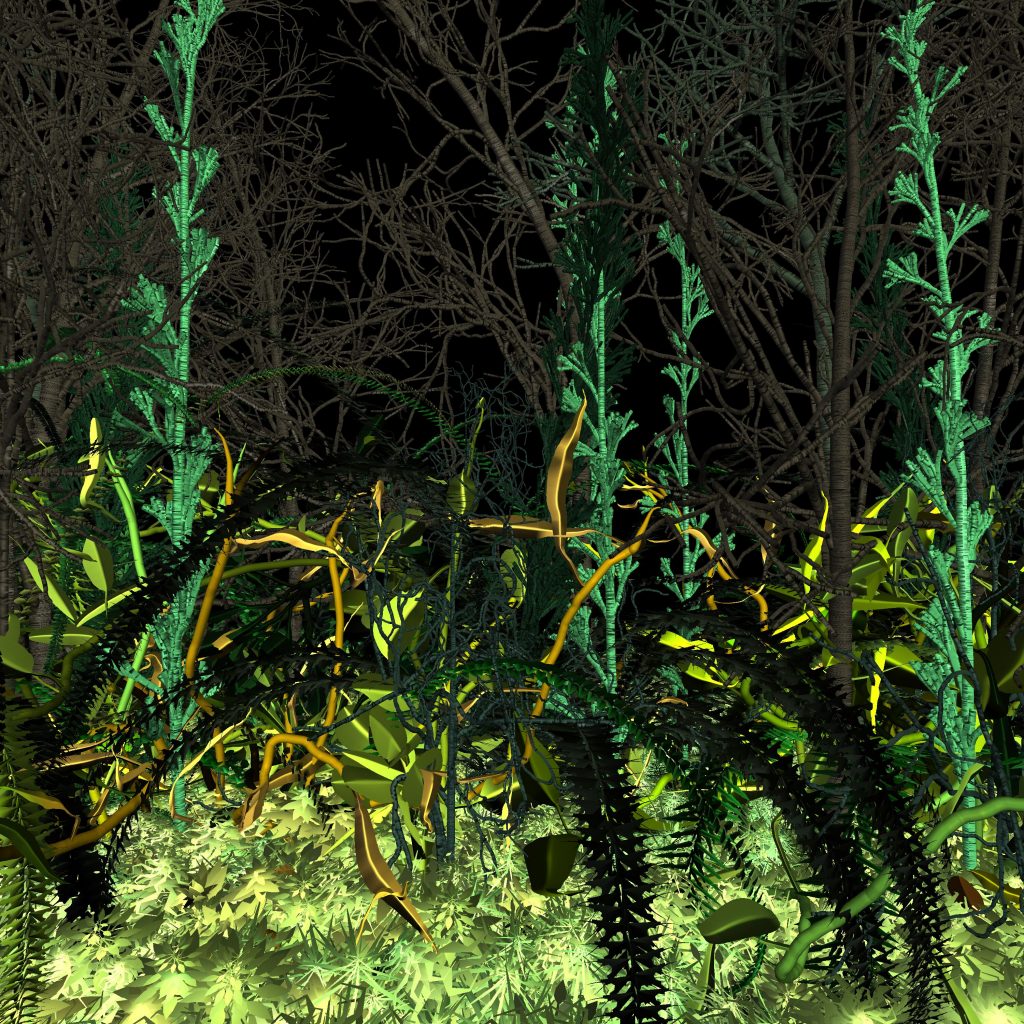 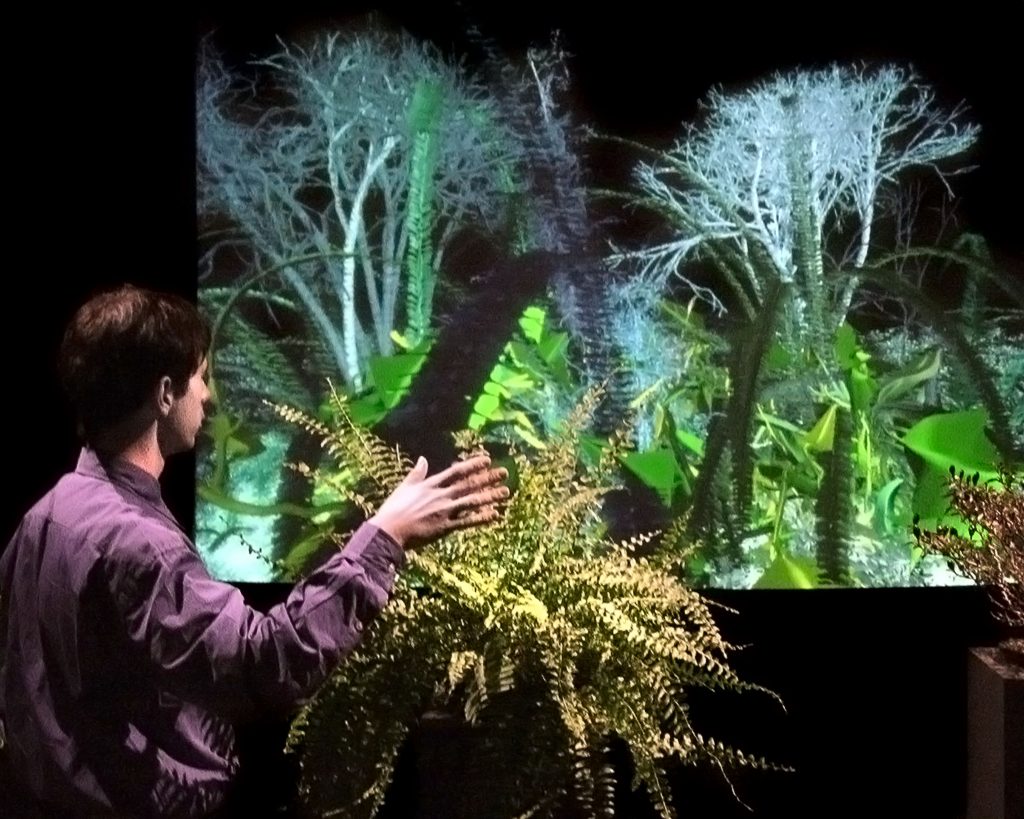 QIU Yu creates a Hyperplasia simulation that channels discrete elements into a symbiotic whole. The artist turned the objects scavenged from urban waste into a system of vivid living. An artificial being rejuvenated from the discarded and the derelict, not in a cancerous neoplasia, but a re-enforcement of livelihood, albeit through technical intervention.

Thomas Feuerstein grows, unlike any other, meat from brain cells and a large amount of philosophy. Punning on the Greek etymology of meat (pancreas), his digestive organ / meat feeds off of Phenomenology of Spirit, the Hegelian magnum opus in order to process food for body. The spiritually blessed enzymic secretion catalysts growth, metabolism and a new kind of life, its Frankenstein-esque dramaturgy is no less authentic than the real and the tenable. 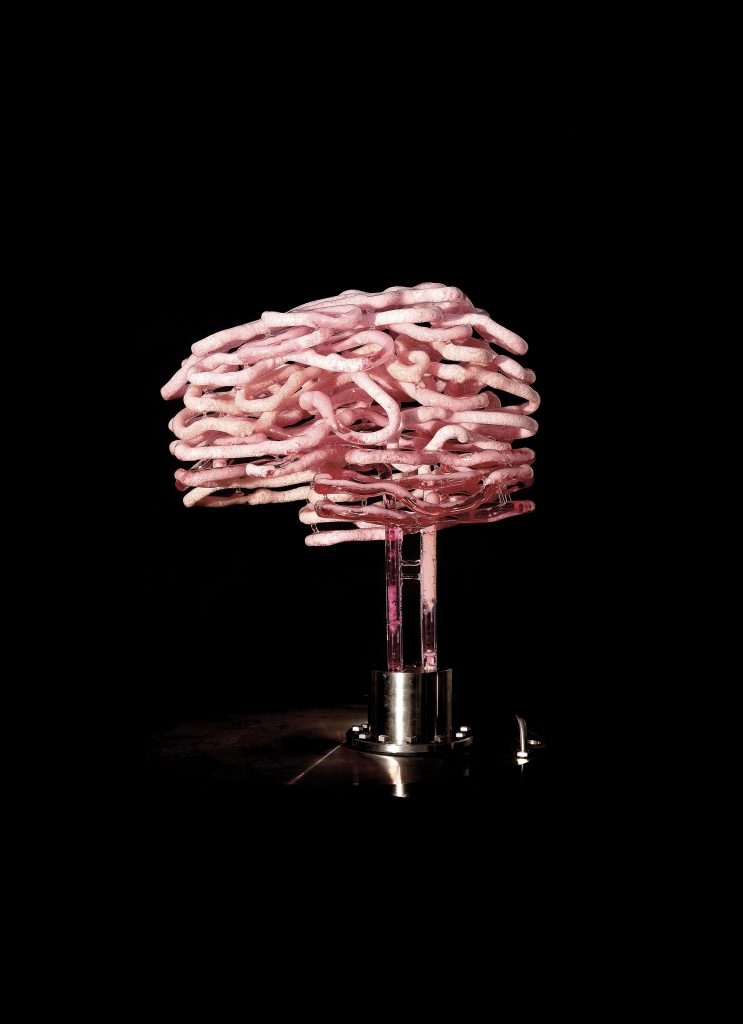 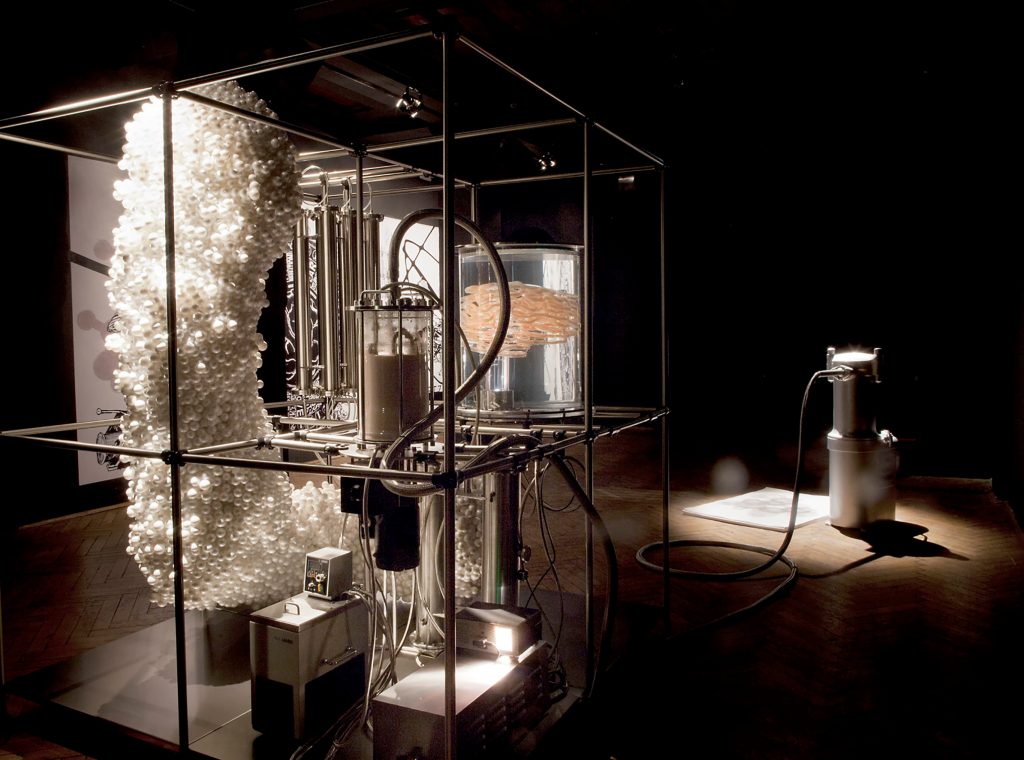 What is it like when greenhouse effects and acid rain dominate Mother Earth as a consequence of the Anthropocene? ArchaeaBot: A Post Singularity and Post Climate Change Life-form does not smack the least humor in imagining and preparing us humans for a way of living to battle the catastrophically scorching umwelt. Anna Dumitriu and Alex May make growing under deep sea a testbed for future humanity. 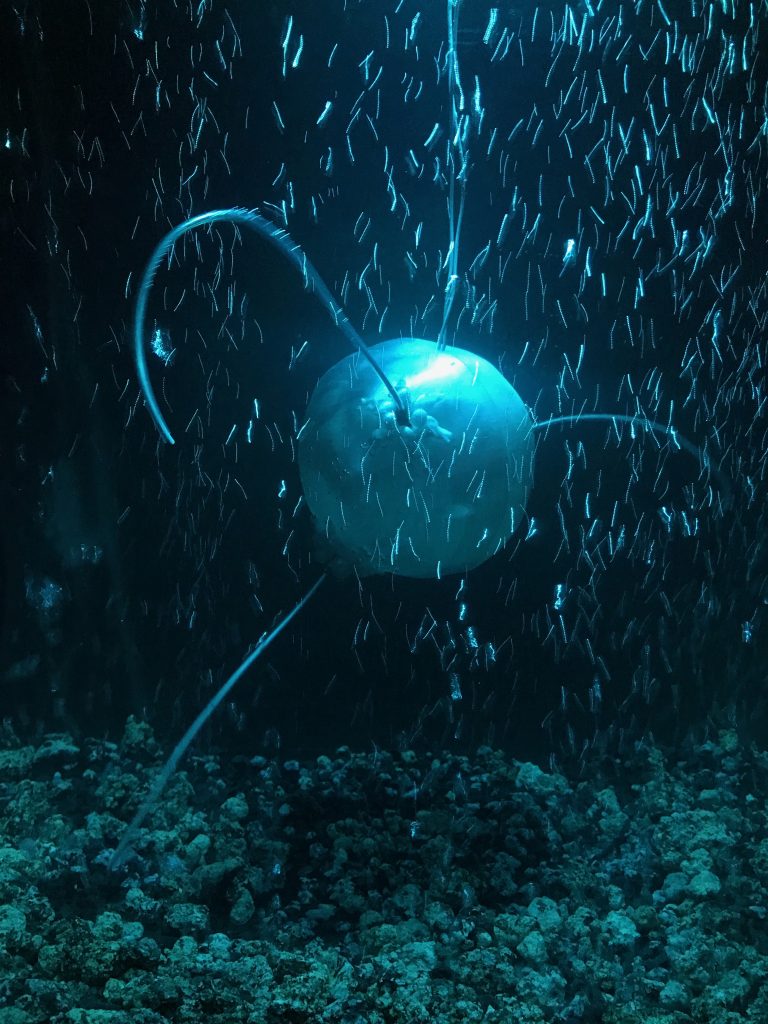 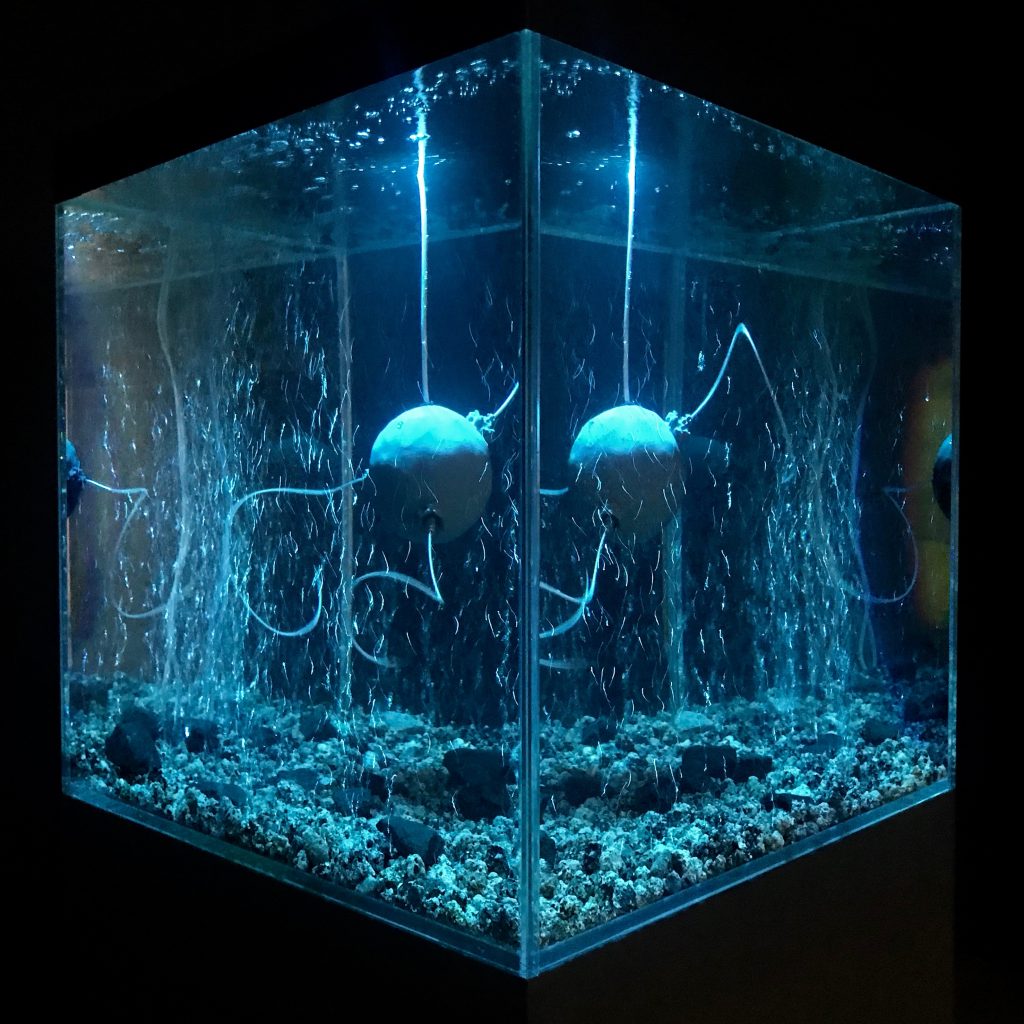 Rather than a rhetoric signifier, the exhibition Growing compels visitors wi­th an experiential and visceral encounter with life forms of natural origin and of artificial inception, or from symbiotic habitats and transgenic hybridity as sources of becoming, thus problematizing the orthodox of Aristotelian taxonomy, soliciting a prospect that complicates the conception of homeostasis, metabolism and the umwelt as fundamental manifestations of life.  Growing not only attests to such energetics as the impulse of nature but also illuminates the act of growing as a technological force that extends the notion of nature to a new paradigm in which ecology without nature calls for another reality on the horizon.

Established in 2013, Chronus Art Center (CAC) is China’s first nonprofit art organization dedicated to the presentation, research / creation and scholarship of media art. CAC with its exhibitions, residency oriented fellowships, lectures and workshop programs and through its archiving and publishing initiatives, creates a multifaceted and vibrant platform for the discourse, production and dissemination of media art in a global context. CAC is positioned to advance artistic innovation and cultural awareness by critically engaging with media technologies that are transforming and reshaping contemporary experiences.

Located at the foot of Chengdu’s Taoism Laojun Mountain in Southwest China, ZHI ART MUSEUM’s serene architecture brings to life the beauty and tranquility of Zen. An iconic work by renowned Japanese master architect, Kengo Kuma, the museum embodies the Eastern philosophy of “Learning from Nature.” With the use of water as key feature, and the exploration of natural materials throughout, the architecture organically integrates its surrounding elements harmoniously. The tranquil flow and soft movements surrounding the entirety of the museum allow for contemplation and evoke notions of eternity through its unity with nature.

ZHI ART MUSEUM focuses to explore global contemporary art and its qualities as a force of universality, in the context of the future, present and past of Eastern aesthetics. The meaning of ZHI is to be an open concept, always striving to move from the world of the known to the unknown, and from the finite to the infinite. Within these parameters ZHI ART MUSEUM’s aim is to explore the integration of human inspiration and technology within the multiple facets of art, while also building a groundbreaking in-depth contemporary art collection and an unparalleled exhibition program, that together will foster a vital contribution to the integrity and creativity of art and art history of the 21st century.

The museum’s core concept is based on the three principles of: Universality, Insight, and Innovation.