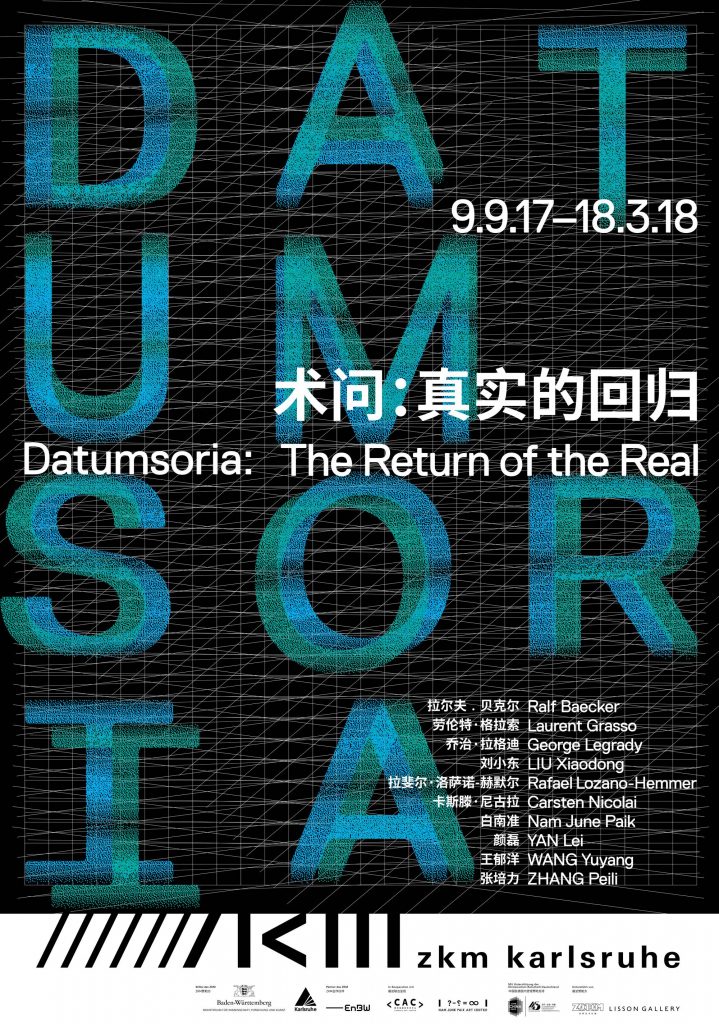 As the second edition of a series of exhibitions under the auspices of the “Art&Tech@” research program conceived and curated by ZHANG Ga, Datumsoria: The Return of the Real is a significantly expanded version of the eponymous exhibition previously mounted at Chronus Art Center, which has commissioned two works by Chinese artists LIU Xiaodong and YAN Lei with support from Lisson Gallery and Beijing ZONHOM Cultural Development Co., Ltd.

The exhibition publication features an extensive essay by ZHANG Ga, elucidating the concept of the real in the information age and the works in the exhibition.

▲ ZKM | Center for Art and Media

▲ Press conference and preview on September 7

▲ Group photo of some guests 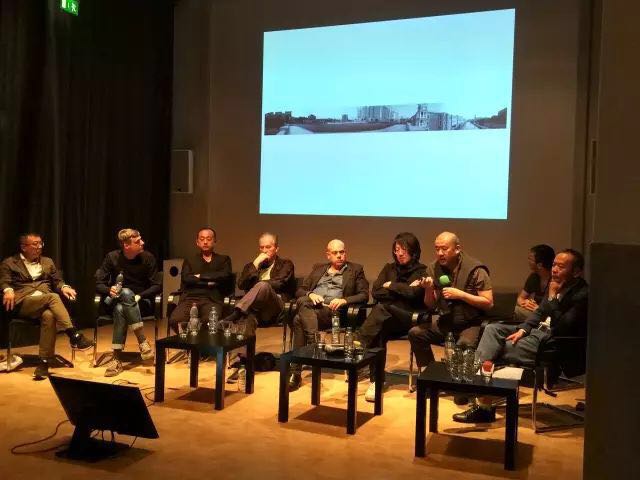 An upright slab of monolith shines, radiating prismatic shades of hues from the outer space; an unidentifiable thing of many elements suspends in the air, a live tree grows out of the torso of this mammoth being. Below which is erected a colossal metal tower studded with 80 screens, large and small, rotating and churning out images and words, cognizant of audiences who pass by, then destroying the traces. Three large canvases flank behind those creatures, spiderlike robots busily stroking on the linens, over time the blankness will be saturated by the traces of BMW assembly lines and the trajectories of traffics at the Brandenburg Tor in Berlin and an anonymous rotary in Karlsruhe.

The above encounter unveils the exhibition Datumsoria: The Return of the Real. A neologism concocted from datum and sensoria, Datumsoria denotes a new perceptual space immanent to the information age.

In Monolith, Laurent Grasso recreates cosmic luminosity in a 3.5-meter tall sculpture modeled after his awe-striking light installation SolarWind at Calcia silos in Paris’ 13th arrondissement. Monolith employs an algorithm that responds in real time to a variety of solar data and translates them into luminous and chromatic variations of colors and lights. Here a cosmic mythology mingles data with fiction, tangibility and ephemerality.

RÊVERIE Reset is a system which takes YAN Lei's deconstruction of imagery to a new dimension. 80 computer-driven display screens of diverse sizes, mounted onto a colossal cylindrical structure, wipe out images uploaded by visitors and render visual information as textual interpretation first by averaging the image’s color and making it monochromatic and then, based on the machine's whimsical reasoning of it, narrating what the content of the image was prior to its destruction. Truth or falsity is both relevant and unfounded just as a machine’s daydream can be as contemplative as aleatory.

Behind these two works unfolds LIU Xiaodong’s monumental Weight of Insomnia. Pushing past the boundaries of his documentary style of live painting, the artist reinvents himself by penetrating the digital now. In this ZKM installation, three locations were carefully identified and equipped with video cameras. Three large-scale canvases are mounted on crude construction scaffolds. A robotically controlled paintbrush jitteringly translates the three discrete, incoming datum captured by video cameras into contours of buildings, silhouettes of trees, outlines of vehicles, and shadows of human figures. It is as if the robot, reincarnated in a human consciousness, wrestles through an endless, restless insomnia to piece together an ever-evolving jigsaw of amorphous desires and anxieties, fleeting nightmares and ruptures.

If Weight of Insomnia becomes an obscurely affective object of desire through the revitalization of generic data input, Carsten Nicolai’s unitape is an examination of perception and visual structures that allude to punch cards of the early computing era. unitape’s immaculate images and sounds are pure mathematical precision that illuminate an algorithmic sublime.

Voice of Sisyphus, a study by George Legrady of a single photograph realized as a continuous performing audiovisual composition, projects an austere sharpness in the Cagean tradition. It is the computational rigor that creates picture sound and sound picture all at once.

Ralf Baecker’s Mirage generates a projection of synthesized landscape that predicates on the apparatus’ own perception through an earth sensing device. Revealing constant shifting of the "hallucination" of the earth the projection resembles a subliminal wandering through a machine sub-consciousness.

In Zhang Peili’s Landscape with Spherical Architecture perception undergoes a certain uncertainty through the digital intermediary. An array of thirty-six screens of still landscape images can be activated by the viewer horizontally or vertically. The work conjures a space where time does not elapse but instead expands which blurs the object and the subject, rendering them interchangeable in a specific point in movement.

Rafael Lozano-Hemmer’s Please Empty Your Pockets elicits a disquieting reality in which memorabilia is preserved as precious human memory at the same time as information aggregated for consumption and profit. A memex machine no longer innocent.

The mammoth thing hovering in the air is the work Quarterly, an instance of many of works under the auspices of WANG Yuyang# which is a software suite conceived as the artist’s equal. Through numerous and distinct iterations WYY# has constructed a paradigm by which intelligence and creativity are no longer a human privilege only, breaching the anthropocentric taxonomy of orders. In reversing the creative operation from the human artist to the otherwise subservient tool-being of the machine, WYY# has not only offered us a wealth of stunningly novel forms in sculpture, painting and performance, but also forced us to think a new a world in which the perception of the real can no longer be reduced to that of human consciousness alone, a reality wherein the production of knowledge becomes a reciprocal conviviality between subject and object.

Nam June Paik had dreamed the dream of internet in 1994 in his great video wall installation. If only his electronic superhighway were a romantic signpost and symbolic gesture of what was yet to come for real. Datumsoria attests, unmistakably, the formidable presence of a planetary membrane of the network that has forever changed the rules of the game, in work and play, in politics and economics.

Datumsoria brings ten highly idiosyncratic works together, shedding new light upon relations that bespeak the logic of the Real of the information age, a reality predicated on binary instructions of the generic, of the uniformity of the Ones and the Zeros, from whose generality comes forth of a hardening of shapes and forms, precipitating sentient residues and invoking emotive potentials. Datumsoria signals that the politics of the real no longer only lies in the sphere of the “actual bodies and social sites recognized in the form of the traumatic and abject subject” (Hal Foster) as the predominant subject of contemporary experience and object of artistic inquiry but also alludes to how grasping this new reality of bits and bytes is as ethically imperative as it is epistemologically fundamental.

Datumsoria: The Return of the Real is an outcome of “Art&Tech@,” a program initiated at Chronus Art Center and conceived by ZHANG Ga, which aims, through resuscitating the valuable legacy of experiments in art and technology from the mid-20th century, to come to terms with the challenges of a technologically constructed timespace. “Art&Tech@” has successfully completed two commissions by Chinese artists LIU Xiaodong and YAN Lei respectively. The outcome of which is being exhibited in conjunction with other international artists at CAC, ZKM | Center for Art and Media, Nam June Paik Art Center and CAFA Art Museum.

About ZKM | Center for Art and Media

As a cultural institution, the Center for Art and Media (ZKM) in Karlsruhe holds a unique position in the world. It responds to the rapid developments in information technology and today's changing social structures. Its work combines production and research, exhibitions and events, coordination and documentation. For the development of interdisciplinary projects and promotion of international collaborations, the Center for Art and Media has manifold resources at its disposal: the Museum of Contemporary Art, the Media Museum, the Institute for Visual Media, the Institute for Music and Acoustics and the Institute for Media, Education, and Economics.